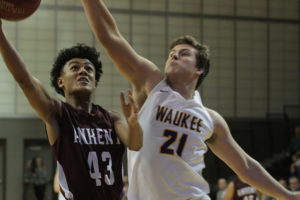 The Ankeny boys' basketball team had two chances to pull off a huge upset on Friday night at Waukee. The Hawks missed one shot at the end of regulation. They had another one blocked at the end of the first overtime. The Warriors then used an 8-0 run in the second overtime to pull away for a 70-65 victory in a CIML Central Conference game. "It's real … END_OF_DOCUMENT_TOKEN_TO_BE_REPLACED