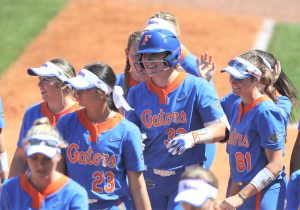 When Kendyl Lindaman was a record-setting slugger for the Ankeny Centennial softball team, she was often intentionally walked by opposing pitchers, occasionally even when the bases were loaded. After becoming one of the top hitters in Division I first at Minnesota and now at Florida, Lindaman has not been walked nearly as much. The junior catcher and … END_OF_DOCUMENT_TOKEN_TO_BE_REPLACED 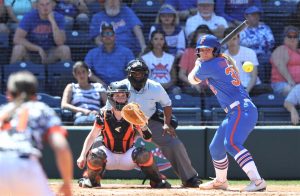 Kendyl Lindaman and the Florida softball team are just one win away from advancing to the Women's College World Series. Lindaman hit an RBI double in the first inning and the fifth-seeded Gators went on to defeat 12th-seeded Tennessee, 3-0, in the opening game of an NCAA Super Regional on Friday in Gainesville. Game Two of the best-of-three series will … END_OF_DOCUMENT_TOKEN_TO_BE_REPLACED 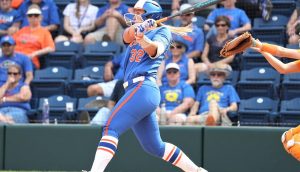 Kendyl Lindaman knew what pitch to expect from Minnesota's Amber Fiser. And she didn't miss it. Lindaman slugged a two-run homer in the first inning to provide the game's only runs as sixth-ranked Florida defeated the No. 20 Gophers, 2-0, in a top-25 softball showdown on Wednesday at Katie Seashole Pressly Stadium in Gainesville. Lindaman, a former … END_OF_DOCUMENT_TOKEN_TO_BE_REPLACED

Kendyl Lindaman has decided to move from Dinkytown to Gainesville. One of the best collegiate softball players in the country, Lindaman announced her decision on Friday to transfer to the University of Florida. The former Ankeny Centennial catcher had previously submitted her name into a national transfer database, signaling her intention to transfer away … END_OF_DOCUMENT_TOKEN_TO_BE_REPLACED