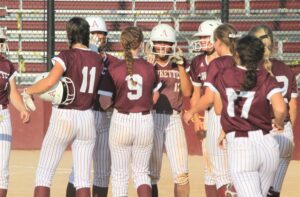 The Ankeny players celebrate after defeating visiting Southeast Polk in the first game of a doubleheader on Wednesday. The Hawkettes swept the twinbill and then followed with a 5-1 victory over visiting Ballard on Thursday. (Photo by Dan Holm) Many high school softball teams are fortunate to have one or two players who can hit the ball out of the … END_OF_DOCUMENT_TOKEN_TO_BE_REPLACED 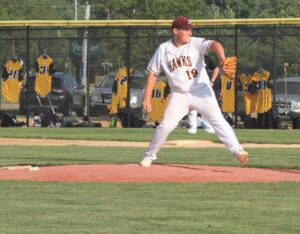 Ankeny's Bryce Rinderknecht throws a pitch during the first game of Wednesday's doubleheader against visiting Southeast Polk. Rinderknecht allowed three runs over five-plus innings to lead the Hawks to a 6-4 victory. (Photo by Dan Holm) The Ankeny baseball players had several reasons to be motivated on Wednesday. For someone like Bryce Rinderknecht, it … END_OF_DOCUMENT_TOKEN_TO_BE_REPLACED 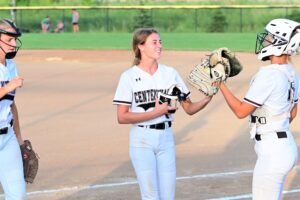 Ankeny Centennial pitcher Sam Klug celebrates with catcher Ella Schulz after recording a strikeout during the second game of Wednesday's doubleheader against visiting Johnston. Klug tossed a seven-hitter and had six strikeouts as the Jaguars posted a 6-3 victory to salvage a split of the twinbill. (Photo by Drue Wolfe) Sam Klug gave the Ankeny Centennial … END_OF_DOCUMENT_TOKEN_TO_BE_REPLACED 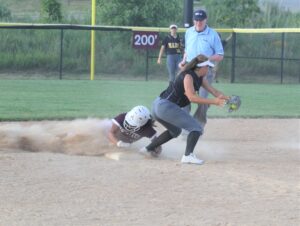 Ankeny's Jasmine Rumley steals second base during the first game of Wednesday's doubleheader against visiting Southeast Polk. The Hawkettes swept the twinbill. (Photo by Dan Holm) If the Ankeny softball team hopes to reach the Class 5A state tournament, the Hawkettes may have to find some different ways to win a couple of regional games. The … END_OF_DOCUMENT_TOKEN_TO_BE_REPLACED 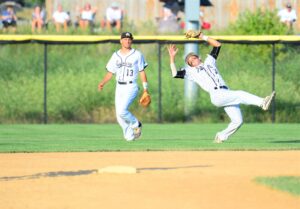 Ankeny Centennial second baseman Tate Williams makes a leaping catch while rightfielder Dylan DeAngelo looks on during the first game of Wednesday's doubleheader against visiting Johnston. (Photo by Drue Wolfe) Time is running out on the Ankeny Centennial baseball team. The 10th-ranked Jaguars were swept by No. 2 Johnston for the second time this … END_OF_DOCUMENT_TOKEN_TO_BE_REPLACED