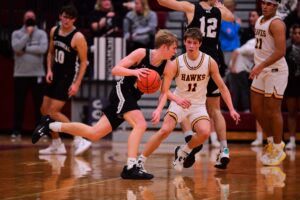 Luke Winkel and Evan Bryan combined for 51 points to lead the Ankeny Centennial boys' basketball team to a 71-55 victory at Cedar Rapids Prairie in a non-conference game on Monday. Winkel poured in 31 points on 13-of-19 shooting, while Bryan added 20 on 7-of-10 shooting. It was a career-high for both players, who each had a pair of 3-point … END_OF_DOCUMENT_TOKEN_TO_BE_REPLACED

Ankeny defensive back PJ Westover has made his college choice. Westover announced on Twitter Monday that he has verbally committed to play football at Iowa Western Community College. Westover helped the Hawks to a 9-2 record last season. He made 42.5 tackles and intercepted a pair of passes. Westover was named to the Class 5A all-state second team … END_OF_DOCUMENT_TOKEN_TO_BE_REPLACED

Ankeny Centennial senior Madison Price has signed a letter of intent to play tennis at Central College in Pella. Price was looking for a smaller college where she could continue her athletic career. "I mainly looked at Loras and Central because I loved the small-town feel of the campus," said Price. "Dubuque is beautiful, but I really like the … END_OF_DOCUMENT_TOKEN_TO_BE_REPLACED

Ankeny assistant volleyball coach Sam Sheldon felt like she was ready to take over her own program. Now, she'll be able to do just that. Sheldon has been named the head coach at Pella High School, pending school board approval. "I feel very ready to serve their community and lead this program," said Sheldon. Sheldon has been an assistant coach at … END_OF_DOCUMENT_TOKEN_TO_BE_REPLACED 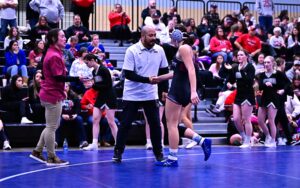 The pairings have been announced for the inaugural girls' state wrestling tournament on Thursday and Friday at the Xtream Arena in Coralville. Eight Ankeny wrestlers qualified for the tournament by placing among the top four finishers in a super regional on Friday at the Iowa Events Center in Des Moines. Only three schools had more qualifiers than … END_OF_DOCUMENT_TOKEN_TO_BE_REPLACED