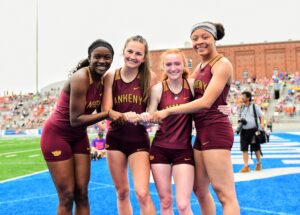 Ankeny sprinters Mytika Mayberry and Eva van de Mortel are both headed to Division I track and field programs in Iowa. They could have remained teammates on the collegiate level, but van de Mortel decided to pursue a different path. While Mayberry has committed to run for Iowa, van de Mortel also considered the Hawkeyes before choosing Northern … END_OF_DOCUMENT_TOKEN_TO_BE_REPLACED 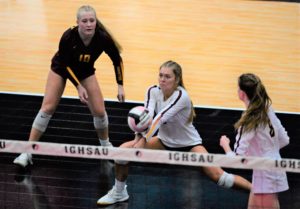 Ankeny senior Malea Daugherty has been a standout in three sports--track, volleyball and softball--during her high school career. She helped the Hawkettes reach the semifinals of the Class 5A state volleyball tournament last fall. On the track, Daugherty ran on Ankeny's eighth-place shuttle hurdle relay at last year's Class 4A state meet. She also ran on … END_OF_DOCUMENT_TOKEN_TO_BE_REPLACED 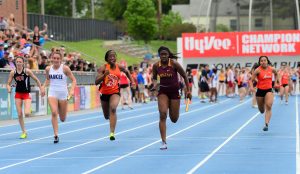 It's been nearly 20 years since the Ankeny girls' track team captured a state title in a relay event. In the previous two years, the Hawkettes almost ended that drought. On Saturday, they finally did. The foursome of Mikala Sidney, Eva van de Mortel, Eva Fulk and Mytika Mayberry raced to a victory in the Class 4A 4x100 relay at Drake Stadium. The … END_OF_DOCUMENT_TOKEN_TO_BE_REPLACED 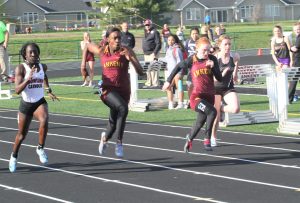 There isn't much separation between the Ankeny and Ankeny Centennial girls' track teams. The two rivals have taken turns defeating each other this season, and on Thursday the Hawkettes and Jaguars battled down to the wire for third place in the CIML Central Conference meet at Ankeny. In the final event of the night, Ankeny placed fourth in the 4x400 … END_OF_DOCUMENT_TOKEN_TO_BE_REPLACED 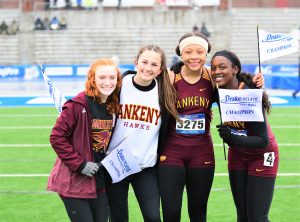 Mytika Mayberry jogged across the infield turf at Drake Stadium on Saturday along with her three teammates, waving their coveted white flags. Just a few minutes earlier, Mayberry had sprinted down the homestretch of the blue oval, anchoring the Ankeny girls' 4x100 relay team to its first victory at the Drake Relays in 22 years. "This feels amazing," … END_OF_DOCUMENT_TOKEN_TO_BE_REPLACED