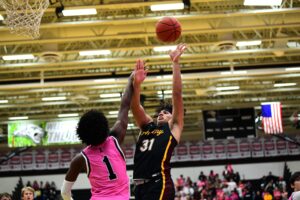 A year ago, Lio Aguirre helped the Ankeny Centennial boys' basketball team to a pair of victories over its crosstown rival. On Tuesday, the sophomore forward returned to the Centennial gym and played a key role as Ankeny posted a 58-48 win over the Jaguars. He had a double-double with 15 points and 12 rebounds. "It was pretty exciting for me honestly," … END_OF_DOCUMENT_TOKEN_TO_BE_REPLACED 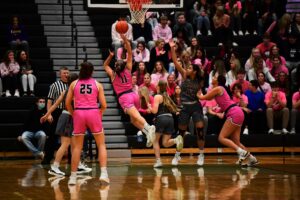 The Ankeny girls' basketball team will have to wait at least another month to defeat its crosstown rival for the first time. Makenna Clark scored 20 points to lead seventh-ranked Ankeny Centennial to a 57-37 victory over the visiting Hawkettes on Tuesday. The win allowed the Jaguars to pull into a first-place tie with No. 8 Ankeny atop the CIML Iowa … END_OF_DOCUMENT_TOKEN_TO_BE_REPLACED 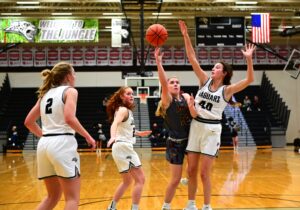 Ever since the split into two high schools, the rivalry between the Ankeny and Ankeny Centennial boys' basketball teams has somewhat overshadowed the battle between the two girls' squads. Centennial owns a 9-7 lead in the boys' series, but the two teams have played several close games in the history of the rivalry. In 2015, Ankeny's Conor Riordan made a … END_OF_DOCUMENT_TOKEN_TO_BE_REPLACED 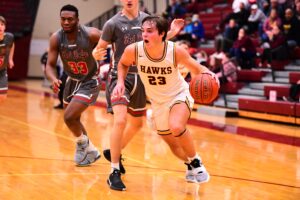 Junior guard Karson Wehde has helped the Ankeny boys' basketball team to a 7-2 record. He is averaging 6.2 points and 2.6 rebounds per game. Wehde is shooting 25.0 percent from 3-point range (9-of-36) and 80.8 percent from the free-throw line (21-of-26). He is also one of the Hawks' top defenders. Here is some inside info on Wehde: How is the season … END_OF_DOCUMENT_TOKEN_TO_BE_REPLACED