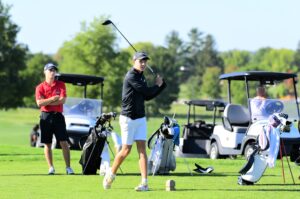 Ankeny Centennial senior Jack Winkel has been named the 2021 Iowa PGA Junior Tour Player of the Year in the 16-18 year old division. He racked up 2,027.33 Player of the Year points. Winkel competed in 11 events this season. He had nine top-10 finishes on the Iowa PGA Junior Tour, including two wins and two ties for first place. Winkel was victorious in … END_OF_DOCUMENT_TOKEN_TO_BE_REPLACED

The Ankeny Centennial girls' cross country team entered just three runners in the varsity race at the Knoxville Invitational on Tuesday. The trio performed well in the hot conditions. Emily Petersen placed ninth in the 5k race with a time of 22 minutes 27 seconds. Brianna Hynick was 16th in 23:55, and Julianne Stevens finished 23rd in 24:17. "We are … END_OF_DOCUMENT_TOKEN_TO_BE_REPLACED 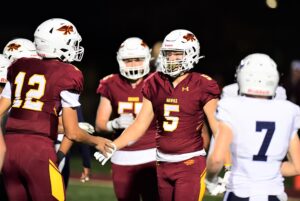 Ankeny receiver Brady McCullough has always had a tight bond with his older sister Sara. The siblings will have a chance to grow even closer over the next few years. McCullough verbally committed on Wednesday to play football at Northern Iowa, where Sara is a redshirt freshman on the women's basketball team. He announced his decision via … END_OF_DOCUMENT_TOKEN_TO_BE_REPLACED 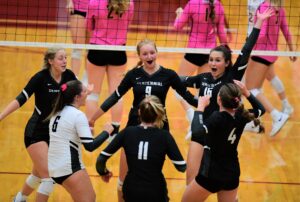 For the last two weeks, the Ankeny Centennial volleyball team focused most of its attention on third-ranked Ankeny. Not even an injury to one of their top players could prevent the No. 7 Jaguars from knocking off their crosstown rival. Centennial moved into sole possession of first place in the CIML Iowa Conference with a 28-26, 31-29, 25-23 victory at … END_OF_DOCUMENT_TOKEN_TO_BE_REPLACED 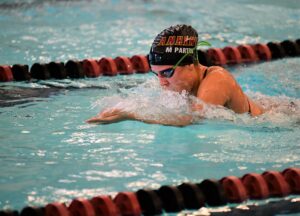 Ankeny girls' swimming coach Michelle Stout is never going to forget this year's senior class. The 14 seniors were recognized on Tuesday during the Hawkettes' 131-54 victory over visiting Mason City at Trail Point Aquatics Center. "This is one of the largest group of senior girls that I can remember," Stout said. "They have shown great leadership and … END_OF_DOCUMENT_TOKEN_TO_BE_REPLACED