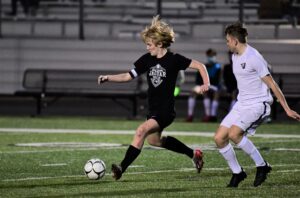 Ankeny Centennial boys' soccer standouts Joe Krueger and Evan Larson have received all-state honors from the Iowa High School Soccer Coaches Association along with the Ankeny duo of Kyle Pederson and Conor Wahlberg. Krueger, a senior defender, was named to the Class 3A first team. He scored four goals this season and was the leader of a defensive unit … END_OF_DOCUMENT_TOKEN_TO_BE_REPLACED 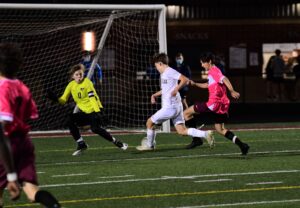 The Ankeny Centennial and Ankeny boys' soccer teams dominated the all-CIML Iowa Conference selections, placing a combined 10 players on the first team. Senior defender Joe Krueger of Centennial, who helped the Jaguars to the league title, was a unanimous pick. He was joined on the first team by five of his teammates--junior defender Jackson Helmkamp, … END_OF_DOCUMENT_TOKEN_TO_BE_REPLACED 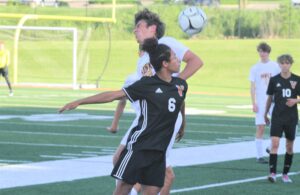 The path to a state title for the Valley boys' soccer team will have to go through both of Ankeny's teams. The fourth-ranked Tigers avenged an earlier loss with a 3-1 victory over No. 13 Ankeny in a Class 3A substate final on Wednesday at Valley Stadium. The Hawks finished the season with an 11-6 record. Valley (16-4) advances to the Class 3A … END_OF_DOCUMENT_TOKEN_TO_BE_REPLACED 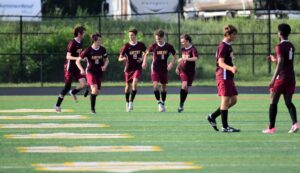 One goal proved to be enough for the Ankeny boys' soccer team. Mason Yeatts scored in the first half and the 13th-ranked Hawks went on to defeat visiting Ames, 1-0, in a Class 3A substate semifinal on Monday. It was Ankeny's second consecutive victory over the Little Cyclones--the Hawks also won, 3-2, in a shootout on May 14 in what turned out to be their … END_OF_DOCUMENT_TOKEN_TO_BE_REPLACED