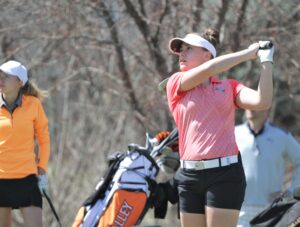 Nobody is more associated with the Ankeny girls' golf program than Toni Dickey. Dickey played for the Hawkettes in high school and later became the head coach of the program for 31 years. She led Ankeny to three state titles and also coached four individual state champions before retiring after the 2017 season. Those individual champs--Sarah Gilbert, … END_OF_DOCUMENT_TOKEN_TO_BE_REPLACED