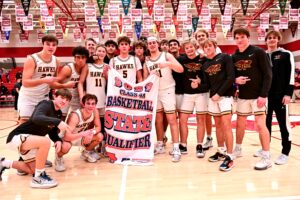 A year ago, the Waukee boys' basketball team ended Ankeny's bid for a second consecutive Class 4A state title with a 74-54 victory in a substate final. On Tuesday at Dallas Center-Grimes, the ninth-ranked Hawks returned the favor. Ankeny pulled away in the third quarter and then held on to beat the defending state champion Warriors, 62-57, in a … END_OF_DOCUMENT_TOKEN_TO_BE_REPLACED