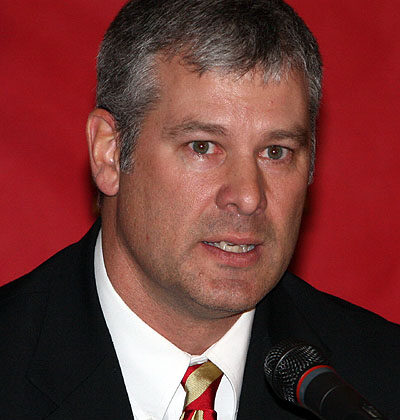 The former Iowa State head football coach has been named the defensive coordinator at Gulf Shores High School in Alabama. His hiring was approved by the Gulf Shores City Board of Education on Thursday night.

VanGorder left after one year at Gulf Shores to become the head coach at American Heritage-Delray (Fla.) High.

“I’m excited for the opportunity that our players will have to play and learn from someone with Paul’s experience,” Gulf Shores head coach Mark Hudspeth told AL.com. “He will also be a great resource for our staff.

“Thank you to superintendent Matt Akin and athletic director Kevin Tubbs for their vision to give Gulf Shores students the very best on and off the field.”

Hudspeth, a college head coach for 15 seasons, was hired a year ago in an effort to raise the level of the Gulf Shores program, which will drop from Class 6A to Class 5A (Region 1) this year. Former South Alabama assistant Kenny Edenfield is the Dolphins’ offensive coordinator.

Now Hudspeth has hired Rhoads, who brings 33 years of coaching experience to the staff. He spent the 2021 season as a defensive analyst for Ohio State, helping the Buckeyes to a Rose Bowl victory over Utah.

Rhoads was the defensive coordinator at Auburn in 2008. He then became the head coach at Iowa State in 2009, where he guided the Cyclones to a 32-55 record and three bowl games in seven seasons.

After leaving Ames, Rhoads made coaching stops at Arkansas, UCLA and Arizona before joining coach Ryan Day’s staff at Ohio State a year ago.

Gulf Shores posted a 6-4 record in Hudspeth’s first season. The Dolphins allowed an average of 17.6 points in 10 games.