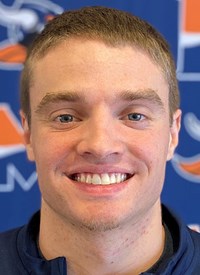 Riordan, a former three-year team captain and two-time all-conference pick at Ankeny, was a two-time CoSIDA Academic All-America honoree at Simpson College, graduating in 2020. He was a three-time first-team American Rivers all-conference guard for Simpson and a finalist for the Jostens Trophy as the outstanding NCAA Division III player.

Riordan averaged 20.1 points and 4.1 rebounds in 2019-20, finishing with 1,533 career points. He was also chosen to play with a Division III team on a 2021 summer tour of Brazil hosted by USA Sports and Events.

Before starting a master’s degree program at Midland, Riordan spent the 2020-21 season as an assistant coach at Ankeny, serving as the sophomore team coach.

“Conor is a perfect fit for Central and our team’s culture,” Steinkamp said in a press release. “I’ve known him a long time now. I tried to recruit him and I coached against him. He’s just a winner. He’s a hard-working guy with great character and I’m really excited to get to work with him.”