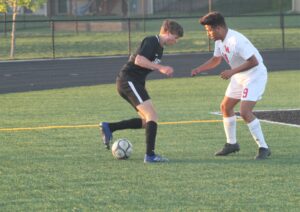 Ankeny Centennial's Andrew Heckenliable wasn't satisfied with recording a hat trick during the first half of Thursday's game against visiting Marshalltown. By the time the 12th-ranked Jaguars had completed their 9-2 victory, the freshman forward had racked up another one. Heckenliable set a single-game school record with six goals as Centennial raised … END_OF_DOCUMENT_TOKEN_TO_BE_REPLACED