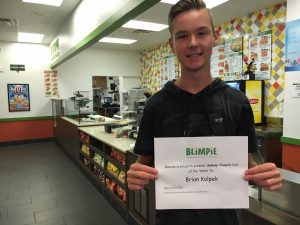 Brian Kolpek of the Ankeny Centennial boys' golf team is the Ankeny Fanatic Sub of the Week sponsored by Blimpie. Kolpek has helped the Jaguars to a 2-0 record in the CIML Central Conference. The senior shot a 76 in a victory over Ames on Aug. 17 at Briarwood Golf Club. The Jaguars will play a dual meet against Johnston on Wednesday at Jester Park. … END_OF_DOCUMENT_TOKEN_TO_BE_REPLACED 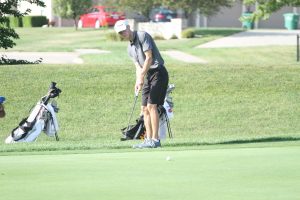 Ankeny Centennial's Eric Ossian lined up his putt from just off the green on the No. 3 hole during Friday's dual meet against Ames at Briarwood Golf Club. The senior then knocked his putt into the hole for an eagle, one of many highlights on the day as the Jaguars posted a 305-318 victory in their CIML Central Conference opener. Centennial also racked … END_OF_DOCUMENT_TOKEN_TO_BE_REPLACED

The Ankeny Centennial boys' golf team finished in the middle of the pack at the Iowa City West Invitational on Monday. The Jaguars opened their season by placing fifth among 10 teams at Blue Top Ridge Golf Course in Riverside. They posted a score of 330. Pleasant Valley shot a 311 to capture the team title, finishing five strokes ahead of Johnston. … END_OF_DOCUMENT_TOKEN_TO_BE_REPLACED