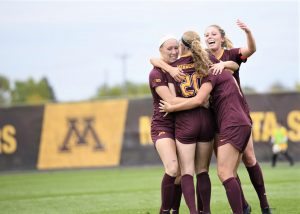 Four former members of the Ankeny-based Iowa Rush Soccer Club have advanced to the semifinals of the Big Ten Tournament later this week at Grand Park in Westfield, Ind. Sixth-seeded Nebraska and seventh-seeded Minnesota both pulled off upsets in the quarterfinals on Sunday, setting up a showdown between the two teams on Friday at 12:30 p.m. The game will … END_OF_DOCUMENT_TOKEN_TO_BE_REPLACED