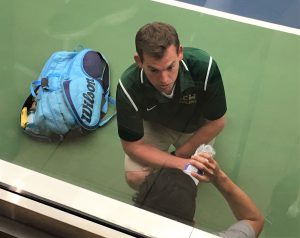 Collin Daniels was one of the youngest head coaches in the state when he took over the fledgling Ankeny Centennial boys' tennis program in 2013. Now, six years and two jobs later, Daniels has been a part of two state championship teams. On Tuesday, Daniels faced both of his former schools while helping Iowa City West to the boys' Class 2A crown for the … END_OF_DOCUMENT_TOKEN_TO_BE_REPLACED