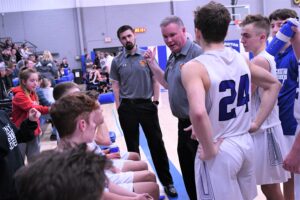 Ankeny Christian Academy has apparently found its next boys' basketball coach. ACA Athletic Director Dave Walter told Ankeny Fanatic on Tuesday that he has hired a replacement for Paul Selindh, who guided the Eagles to a 171-42 record during his tenure as the head coach. "We're just looking for the right time to announce it," Walter said. "It'll … END_OF_DOCUMENT_TOKEN_TO_BE_REPLACED