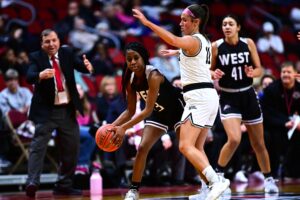 Before they coached against each other on Monday at Wells Fargo Arena, girls' basketball coaches Scott DeJong of Ankeny Centennial and Dr. Anthony Pappas of Waterloo West had a few moments to reminisce. It was 25 years ago that the two coaches battled in an epic state tournament game at Veterans Memorial Auditorium, which was also known as "The … END_OF_DOCUMENT_TOKEN_TO_BE_REPLACED

The longtime assistant coach discusses the Jaguars' 67-59 loss to Waterloo West in the Class 5A quarterfinals as well as the 25th anniversary of Ankeny's epic five-overtime victory against the Wahawks in the semifinals of the 1997 state tournament. … END_OF_DOCUMENT_TOKEN_TO_BE_REPLACED