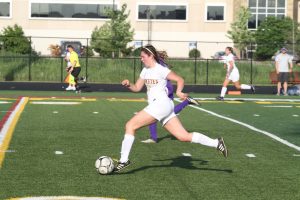 Ankeny's Alexis Legg scored four goals in the first 10 minutes of Wednesday's girls' soccer game against visiting Indianola. And she wasn't done yet. Legg later added a fifth goal, allowing her to break the school's single-season scoring record, as the second-ranked Hawkettes romped to a 10-0 victory in a Class 3A regional semifinal. The game ended at … END_OF_DOCUMENT_TOKEN_TO_BE_REPLACED