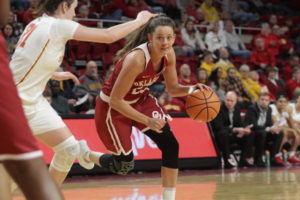 For many reasons, Maddie Manning returned to the Oklahoma women's basketball team for one more season. Another chance to play at Iowa State was just one of them. Manning, a former Ankeny star, paid her final visit to Hilton Coliseum on New Year's Eve, helping the Sooners to a 74-69 victory before a crowd of 9,791. The graduate student guard scored 12 … END_OF_DOCUMENT_TOKEN_TO_BE_REPLACED