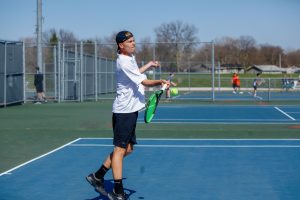 The Ankeny Centennial boys' tennis team played by far its closest dual meet of the season on Friday. After splitting the six singles matches, the 10th-ranked Jaguars won three of the five doubles contests to post a 6-5 victory at No. 9 Ames. They improved to 3-1 in the CIML Central Conference and 7-1 overall, while the Little Cyclones' records dropped to … END_OF_DOCUMENT_TOKEN_TO_BE_REPLACED

The Ankeny Centennial boys' tennis team proved on Friday that it can play with some of the state's best squads. The Jaguars placed second among eight teams in the Dennis Hoefle Invitational at Ankeny. They finished with 58 points, more than twice as many as last season. Valley won the tournament for the third straight year, racking up 75 points. The … END_OF_DOCUMENT_TOKEN_TO_BE_REPLACED