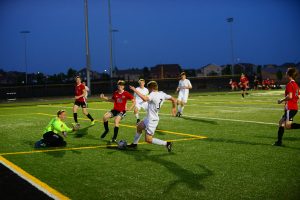 The Ankeny Centennial boys' soccer team celebrated its Senior Night on Tuesday with a 9-0 victory over visiting Fort Dodge. Will Overberg scored a pair of goals and also had two assists as the sixth-ranked Jaguars closed out the regular season with a 13-4 record. They will now have a week off before opening substate play. The loss was the 11th in a row … END_OF_DOCUMENT_TOKEN_TO_BE_REPLACED