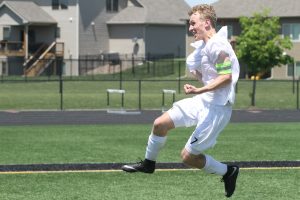 When Mitch Hinners woke up on Saturday morning, he had no idea he would play such a pivotal role for the Ankeny Centennial boys' soccer team in its quest for a berth in the Class 3A state tournament. His diving saves, though, were a driving force for the eighth-ranked Jaguars in their 1-0 shootout victory over No. 14 Des Moines Lincoln in a substate final … END_OF_DOCUMENT_TOKEN_TO_BE_REPLACED

The Ankeny Centennial boys' soccer team will be spending a lot of time this week on a bus. The fourth-ranked Jaguars played the first of three road games in five days on Monday at Norwalk, where they posted a 2-0 victory. The non-conference contest was originally scheduled for April 6, but was postponed due to bad weather. Centennial is in the midst of … END_OF_DOCUMENT_TOKEN_TO_BE_REPLACED