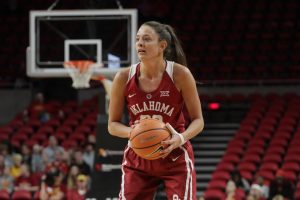 Former Ankeny star Maddie Manning celebrated her Senior Night on Wednesday with a victory over Iowa State. Manning had 12 points, three assists and two steals as the Oklahoma women's basketball team defeated the Cyclones, 80-71, before a sparse crowd at Lloyd Noble Center in Norman. The game was played despite a snowstorm that blanketed the Sooner state, … END_OF_DOCUMENT_TOKEN_TO_BE_REPLACED