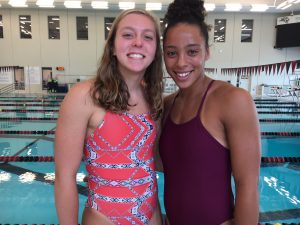 The Ames girls' swimming team has won seven of the last eight state championships. There aren't too many opponents that might be able to end the Little Cyclones' dominance this season, but Ankeny could be one of them. The Hawkettes return six state qualifiers from a squad that placed fourth at last year's meet with 171 points, their highest finish ever … END_OF_DOCUMENT_TOKEN_TO_BE_REPLACED