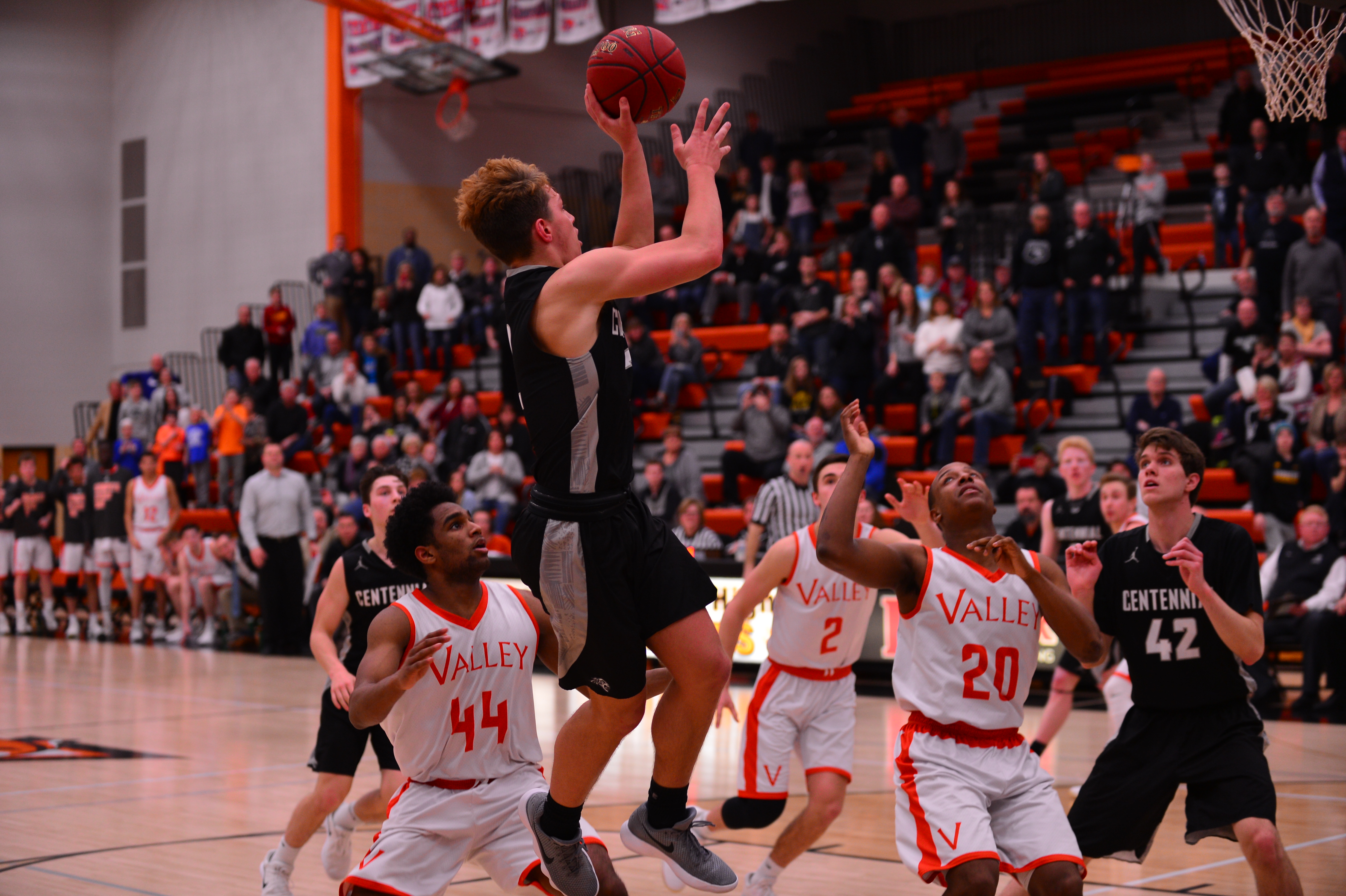 It shouldn’t surprise anyone that Friday’s Class 4A substate semifinal between the Ankeny Centennial and Valley boys’ basketball teams came down to the last possession.

Whenever these two CIML Central Conference rivals collide, the game often is decided in the final seconds.

On Friday, second-seeded Valley escaped with a 48-46 victory in overtime when Centennial’s Brandon Van Meter missed a short jumper as time expired. It was the ninth consecutive win for the Tigers (15-7), who will play top-seeded Des Moines Hoover (19-2) in Tuesday’s substate final.

“At the end of overtime we didn’t get our first option, but Van Meter had the pull-up just inside the lane and (the ball) went off the rim,” said Centennial coach Bob Fontana, whose team finished the season with a 14-9 record. “But I’m proud of our kids for the way they fought. I couldn’t ask for a better effort.”

Valley ended the Jaguars’ season for the fourth time in five years. The Tigers also defeated Centennial twice during the regular season by a total of five points.

“Just like that it’s over,” tweeted Centennial senior Jackson Brannan after the game. “Wouldn’t trade these memories for the world. Love my dudes.”

Strait had a chance to win the game at the end of regulation, but his floater from about 15 feet wouldn’t go down.

“We got a good look,” Fontana said.

Strait scored Centennial’s only points in the overtime period. He made a 3-pointer to give the Jaguars a 46-45 lead.

Valley’s Trayvon Williams then drove for the go-ahead basket with 25 seconds left. The Tigers later added a free throw, setting up the dramatic finish.

“They were switching up their defenses a lot, but they played more zone than man-to-man,” Fontana said of the Tigers. “We put in a few new wrinkles against their zone, and that’s what led to some of our looks from 3-point range. We just didn’t finish from 10 feet on in a lot of the times.”

Brannan went 4-for-10 from behind the arc for Centennial, which connected on 8-of-18 3-pointers. However, the Jaguars went just 9-for-29 from inside the arc.

Valley held a 21-19 lead at halftime as both teams struggled to score.

“The refs let us play, and it was physical,” Fontana said. “In the first half, we had six possessions where we had great looks at the rim and we didn’t finish.”

The Tigers opened the second half with a 6-0 run before Centennial rallied, closing the gap to 36-33 after three quarters. The score remained close the rest of the way.

“We made some big plays and some great hustle plays,” Fontana said. “We hit some big shots at key moments in the second half.”

However, the Jaguars committed a season-high 17 turnovers and also went just 4-of-10 at the free-throw line. Those were two of the three statistics that Fontana pointed out after the loss.

The other one was the unexpected 18 points from Valley senior Michael Bryan, who was averaging just 7.2 points per game.

“(Bryan) had a big game obviously,” Fontana said. “We did a really nice job on some of their other guys. (Blake) Brinkmeyer didn’t score, we held the Australian (Derek Emelifeonwu) to six, and Williams had 10. If you would have told me that we would hold those three guys to 16 points, I’d have thought we won the game. But obviously we didn’t.”

In the locker room afterwards, Fontana allowed his seniors to address the rest of the team. He said they will all be missed.

“They each brought something different to the table for us,” he said.

Zach Kluver and Strait are two of the seniors who will have to be replaced. They both moved to Ankeny during high school and found a home at Centennial.

“Wouldn’t trade these last three years for anything,” Kluver tweeted after the loss. “Thank you to everyone who made the change feel like home! Thank you for all the lasting memories and friendships. Forever a Jag.”