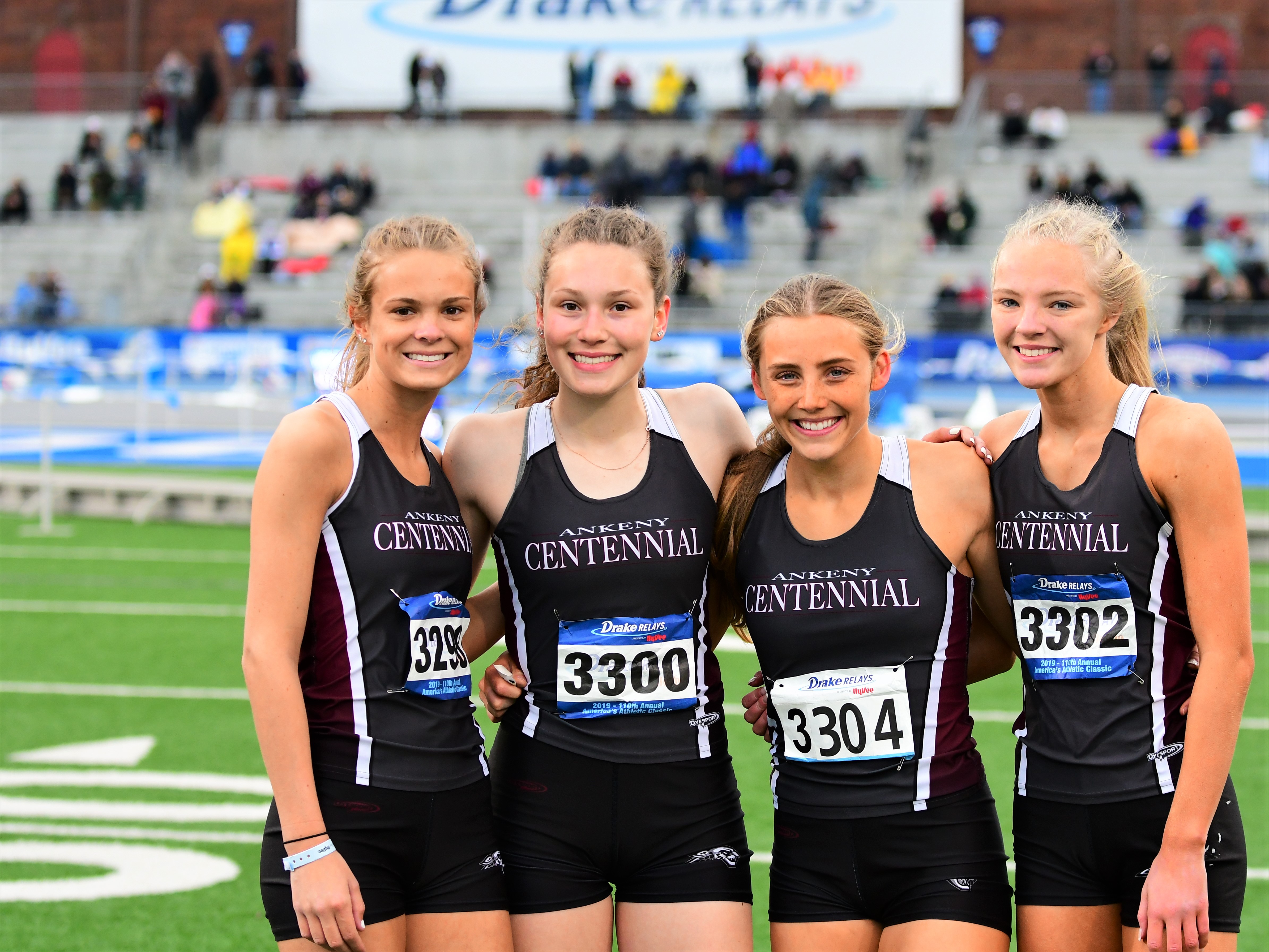 After posting a clocking of 1:05.52 in the preliminaries of the shuttle hurdle relay at the Drake Relays on Saturday morning, the Ankeny Centennial girls’ squad advanced to the final with the fastest qualifying time.

“We were really happy with how prelims went and were kind of excited to see what would happen in the finals,” said leadoff runner Katie Petersen.

Maybe the Jaguars were too excited.

Centennial ran to an apparent fourth-place finish in the finals before being disqualified for an illegal exchange. One of the Jaguars’ hurdlers left too early.

“Our finals run wasn’t as clean as the prelims, but we were clocked at 1:04.89, which would have been a new school record,” said Centennial coach Andrew Kruzich. “But we left early on the last exchange, and that’s a call that two officials have to agree on to have it count against us. So it must be a good call.”

The shuttle hurdle final was an all-CIML affair. Ames won the race in a time of 1:03.75 after the anchor runners for both Waukee and Dowling Catholic stumbled over the last hurdle.

“We were really pleased with how well we ran in rough conditions in the prelims,” Kruzich said. “We dropped almost a second off of our season’s best. It was great to have the number one qualifying time to the finals, but we knew the other three teams had run faster than that time coming into the meet. So we had our hands full.”

The Centennial team consisted of Petersen, Sophie Lampe, Kayla Eilander and Meg Ridout. The Jaguars thought they had clinched a Drake Relays medal by reaching the final, but the disqualification meant that the fourth-place medals were not distributed.

“The shuttle hurdle is the only relay at Drake that doesn’t medal out to six spots, which we lived last year when we got fifth,” Kruzich said. “This year, because we got DQ’d, we lost our medals for making the finals. It stinks because clearly we were one of the top four teams to run the hurdles today, and it’s almost like you’re punished with having to do it again in the finals, but those are the rules–and we know them. The shuttle is a great event for us, but there are 44 things that can go wrong in that relay–10 hurdles each and four false starts.

“We just have to be cleaner,” he added.

Still, Kruzich liked the way that the Jaguars responded to the adversity.

“The positives are that we know how fast we can be, and I was also proud of how our girls took the news,” he said. “They were supportive of each other and didn’t point fingers. Those are two good signs for us going forward.”

Eilander has helped the Jaguars overcome the absence of standout hurdler Calea Jones. Jones, who anchored the team’s relay a year ago, has missed most of the season due to an injury.

“It’s been good with Kayla,” said Petersen, who put the Jaguars ahead with a strong opening leg in Saturday’s final. “She’s really stepped up.”

There’s a chance that Jones could return to action by the end of the season. She is also one of the state’s top high jumpers.

“She’s been getting healthier, so I guess we’ll see if she can come back,” Petersen said.

The Jaguars also competed in the 4×100 relay on Saturday. The foursome of Hannah Wilson, Lampe, Ridout and Petersen placed 20th overall in a season-best time of 50.78 seconds.