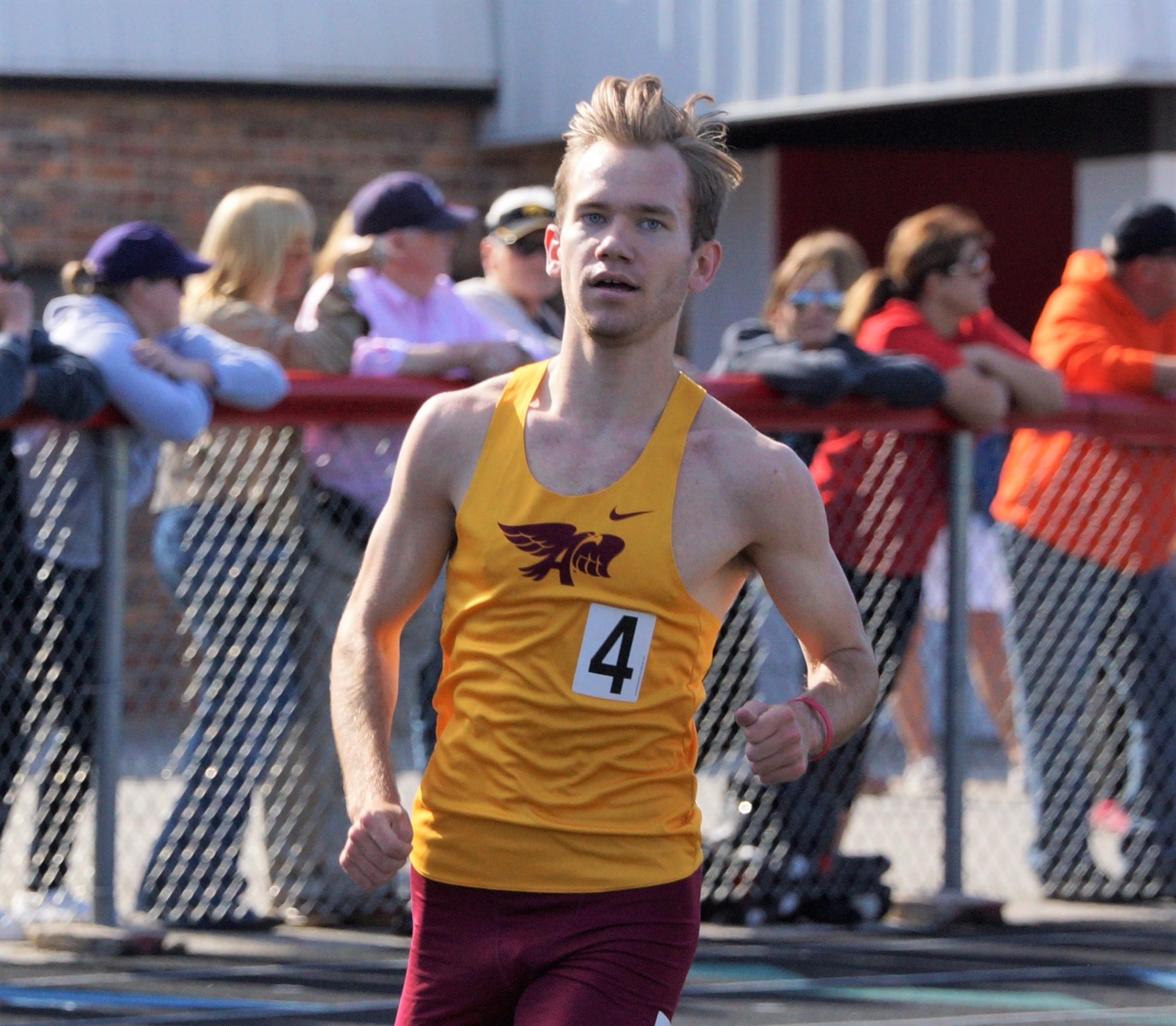 Ankeny’s Tim Sindt accomplished what he wanted to on Friday during a boys’ Class 4A district track meet at Fort Dodge.

The two-time state cross country champion qualified for the state meet in all three of his events, helping the Hawks to a third-place finish in the eight-team field.

“I was very happy with the meet,” said Sindt. “The team qualified 17 events, which is the most since I’ve been in high school. I won both distance races–which was my goal–and our (distance medley relay) ran fast enough to get in the fast heat at state.”

Sindt also anchored the Hawks to a third-place finish in the distance medley relay. He teamed up with Kade Somers, Peyton Agan and Anyoun Anyoun to post a time of 3:36.37, which ranks fourth among all qualifiers in Class 4A.

Like Ankeny, Centennial had a pair of first-place finishes. Dylan DeAngelo won the 400 hurdles in 54.23 seconds–which ranks third in the state overall–while teammate Jon Wong was the runner-up in 55.36.

Those two also teamed up with Tyler Johnson and Nathan Reinke to win the shuttle hurdle relay. The Jaguars were clocked in 58.45 seconds.

“I am very pleased with how the Hawks competed,” said Ankeny coach Nick Nelson. “We qualified more events than the coaching staff expected, but thought if the guys competed well we had a chance to get all events in to the state meet. I am so happy for the athletes that will be representing the Ankeny Hawks at the state meet. The hard work by the athletes and the attention to detail by the assistant coaches have the Hawks set up for a successful end to the season.”

Centennial’s Seth Pippett placed second in the long jump on Friday with a leap of 20 feet 11.5 inches. James Jacavino was the runner-up in the high jump at 6-1, while Trevor Formanek placed third in the discus with a throw of 145-3.

Thomas Collins took third in the 400 in 50.03 seconds. Teammate Austin Jones placed fourth in 51.98 and also qualified for state.

Liam Murphy placed fourth in the 200 in 21.69 seconds, while teammate Avery Gates was fifth in 22.81. They both earned a trip to state.

Centennial placed third in the sprint medley relay with a time of 1:32.60, which ranks fourth in Class 4A. That team consisted of Gates, Wong, Murphy and Collins.

Thompson also qualified in the 400 hurdles. He placed fifth in that event in 56.79.

Jacob Baier qualified in both throwing events, placing second in the discus (150-4) and third in the shot put (53-2.25). Teammate Kayden Daniels placed fourth in the high jump at 5-10 and also qualified.

The Hawks automatically qualified with a second-place finish in the 4×800 relay. The team of Ethan Norgaard, Elwell, Drake Strnad and Noah Odson was clocked in 8:15.40.