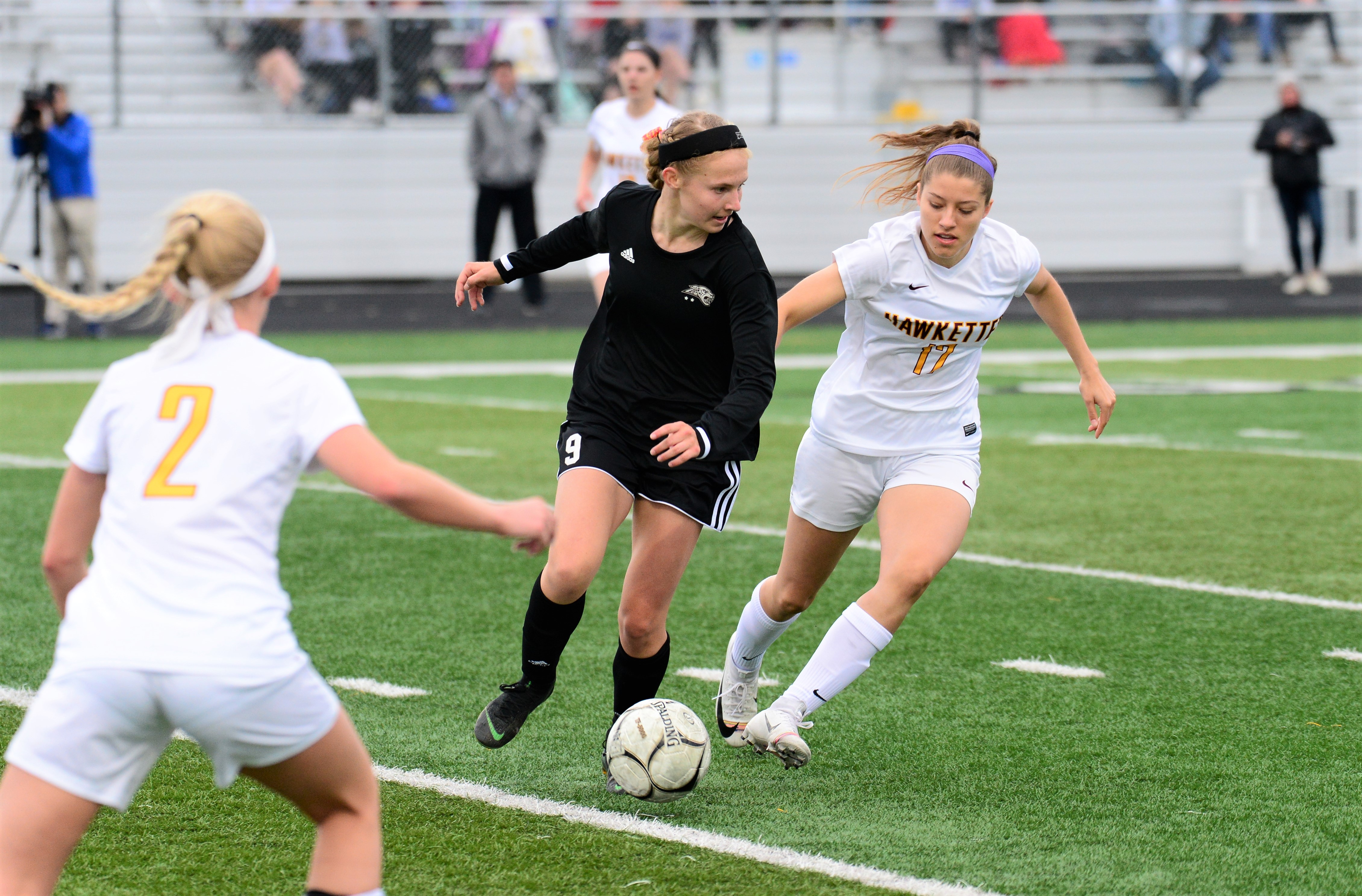 The Ankeny and Ankeny Centennial girls’ soccer teams remained in a tie for first place atop the CIML Central Conference as both squads posted road victories on Friday.

Fourth-ranked Centennial recorded a 1-0 overtime win at Urbandale, while No. 5 Ankeny rolled to a 5-1 triumph at No. 10 Johnston. The Hawkettes and Jaguars are both 3-1 in the league with one game left to play.

No. 14 Ames could play a big role in determining the outcome of the race. The Little Cyclones will host Ankeny on Monday before visiting Centennial on Thursday.

The Jaguars survived a grueling battle at Urbandale, where they couldn’t find the back of the net until late in the first overtime. Meghan White scored the game-winning goal off an assist by Elizabeth Overberg.

“In the 89th minute we generated at least three shots on a Grace Meador cross,” said Centennial coach Chris Allen. “Overberg made the keeper make a great save, and Meghan crashed the deflection with determination and execution to put it away.”

Centennial improved its record to 10-3. The J-Hawks finished 1-4 in the conference and dropped to 4-9 overall.

“We came out a little flat, and Urbandale is a good enough team to take advantage of that,” Allen said. “They are much better than their record shows. Again, it’s the nature of our conference. You can be a top 15 team and be around .500.”

Neither team generated much of an attack in the first half, but the Jaguars eventually began to take control of the game.

“We came out better in the second half but still struggled to generate great looks or execute when we had chances, but we finished the half with some looks and momentum,” Allen said. “And then we really started to put them under in the first overtime period.”

Ankeny, meanwhile, bounced back from Tuesday’s loss at Centennial with a convincing win at Johnston. The Hawkettes improved to 11-3, while the Dragons finished 2-3 in the league and fell to 3-4 overall.

“I think the scoreline was a little flattering,” said Ankeny coach Simon Brown. “Johnston just caught us after a tough loss against Centennial, and we got a reaction from the girls. The conversation before the game was to take any hard feelings from Tuesday’s game out on Johnston. Sometimes it takes a tough loss to get the best out of a team, and we definitely got that. It was by far our best performance of the season.”

Ankeny jumped out to a 2-0 lead on goals by Kate Schaeffer and Ashley Harrington. The Dragons then answered with a goal to cut the lead in half.

“The referee must have got bored and wanted something to do because he gave them a PK for nothing,” Brown said. “He was the only person in the stadium that saw a foul, and then the forward missed (the PK). But then they got in behind once and (scored and) made it 2-1.”

From there, Ankeny dominated the rest of the game. Chloee Kooker scored off a free kick, Harrington got her second goal a minute later, and Ellie Gretz eventually added another goal to complete the scoring.

“Our girls just took it to another level,” Brown said. “They wanted to send a message that we were better than the result showed on Tuesday, and Johnston just caught us when we were on fire.”