You are here: Home / Jaguars / Winter / Girls' Basketball / Jaguars roll past Lincoln for most lopsided victory in school history 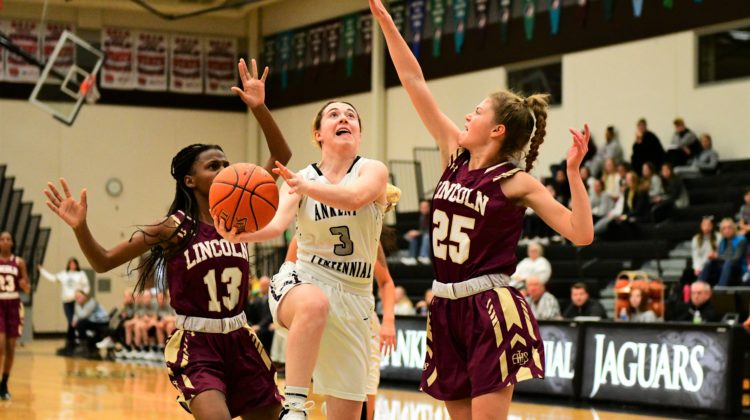 For one day, though, that’s exactly what the seventh-ranked Jaguars did.

Centennial built a 57-7 halftime lead and then coasted to an 84-14 victory over visiting Des Moines Lincoln in its season opener on Saturday afternoon. It was the Jaguars’ most lopsided win in school history, surpassing a 75-6 rout at Marshalltown in the 2015-16 campaign.

“We were putting the ball in the basket, and that’s always a good sign,” said Centennial coach Scott DeJong. “We were scoring in transition, at the blocks and from the 3-point line. It was encouraging that we got a lot of people playing time and had a lot of balanced scoring.”

All 15 Centennial players saw action, and 12 of them scored. Alexandria Keahna-Harris scored 12 points on 6-of-7 shooting to lead the Jaguars.

Half of Centennial’s points came from its bench, including Keahna-Harris, who also had five assists and four steals.

“Alex was sick and missed a few practices. She’ll be in there (as a starter) if she’s healthy,” DeJong said. “But we’ve got a deep team. When we go to the bench, we’ve got kids who can score.”

Jenny Hagg had 10 points, five rebounds and three steals. Hagg and Averi Porter each went 2-for-3 from behind the arc for the Jaguars, who had eight 3-point goals.

Meg Burns added nine points on perfect shooting. She went 3-for-3 from the field, including a 3-pointer, and 2-for-2 at the free-throw line.

Centennial will travel to Southeast Polk on Tuesday to play the No. 6 Rams in a rematch from last year’s Class 5A state tournament. Road trips to No. 5 Valley and No. 3 Johnston will then follow.

“We know things are going to get a lot tougher,” DeJong said.