You are here: Home / Hawks / Winter / Girls' Basketball / ‘It was just a matter of time’: Hawkettes stifle Ames for first conference victory 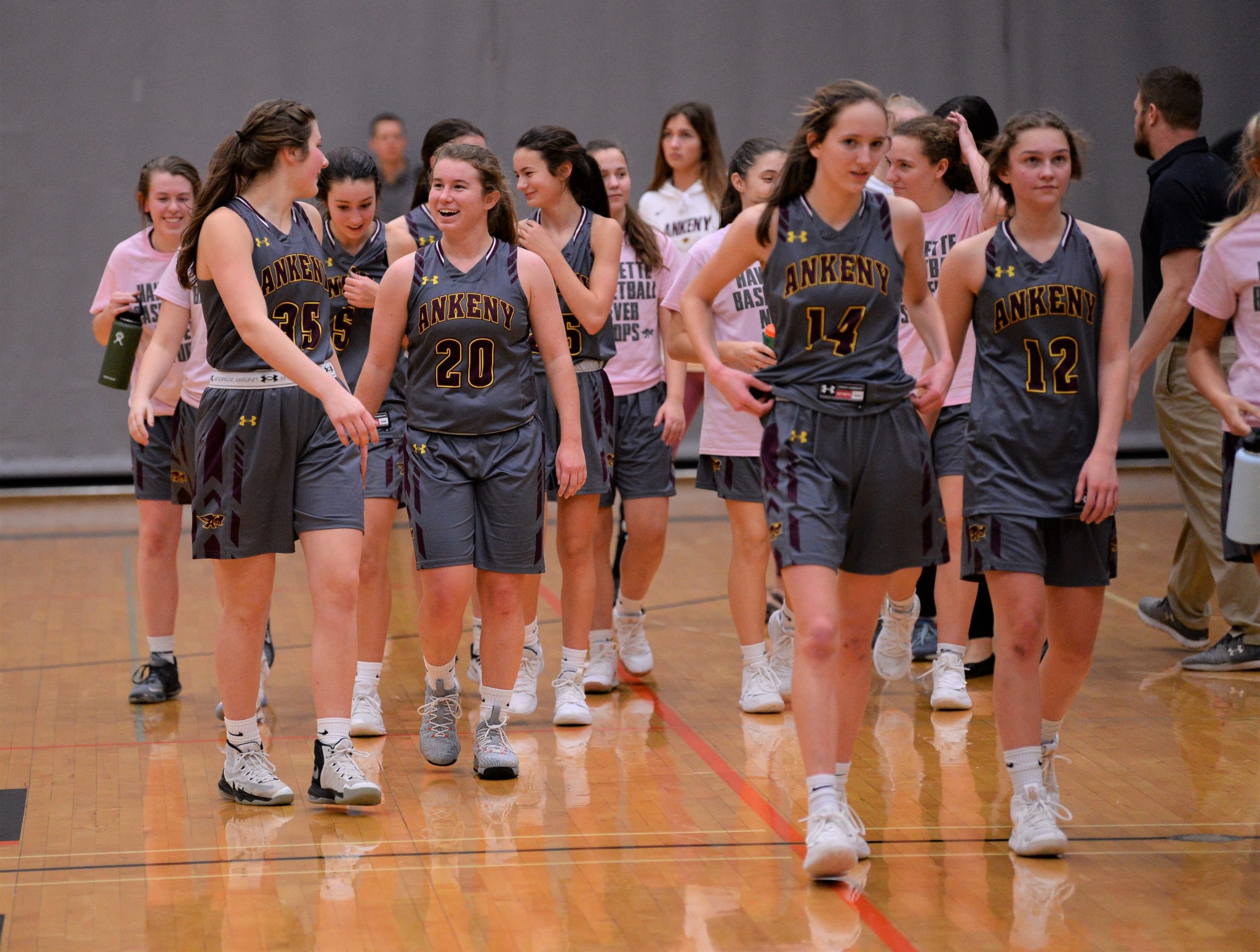 She just didn’t know when.

Friday turned out to be the night as Harrington scored 16 points to lead the Hawkettes to a 60-49 victory at Ames. They improved to 1-7 in the CIML Central Conference and 7-10 overall, while Ames’ records fell to 3-5 and 8-9.

Ankeny avenged an earlier 56-48 loss to the No. 12 Little Cyclones.

“It feels really good to get our first conference win,” said Harrington. “I think we knew it was coming–it was just a matter of time. Lately our team has been jelling really well, and it has shown as we’ve had four close games within the past two weeks.”

Ankeny held a 27-22 lead at halftime, then extended the margin in the second half. A strong start was the key to the Hawkettes’ win.

“We got down 12-0 in the first game against Ames, and that was the difference,” said Ankeny coach Dru McAnelly. “We got off to a much better start on Friday. We just played solid, consistent basketball for 32 minutes.”

The loss was the third in a row and the sixth in the last eight games for the reeling Little Cyclones.

“That was a big one,” McAnelly said. “I’ve told the girls that there isn’t another group in the state that deserves a big win more than you. I’m so happy for them. They deserve it.”

Caroline Waite led Ames with 21 points. She had four 3-point goals, but went 7-for-19 overall from the field.

“Jenna (Pitz)’s defense on Waite was really huge,” McAnelly said. “Waite got some of her points when Jenna was out with foul trouble in the first half.”

Teagan Lipsey had 13 points for the Little Cyclones, but Ashley Iiams was held to just two–which came on a basket in the final seconds.

“I just thought we defended as hard and as consistent and as fundamentally sound as we have in my four years here. To go to Ames and to hold them to 49 points is a pretty good defensive effort, because they historically shoot the ball better at their place,” he added.

Harrington led the offense, going 3-for-4 from 3-point range.

“Obviously, defense did play a huge role in our victory, but also we had an answer on offense when things didn’t go our way when normally we may go down from a run by the other team,” Harrington said. “I think it is safe to say I was feeling it. I saw my opportunities and took them while making the most of them. Even though I had a really good night personally, it wasn’t just me, it was our whole team and that ultimately led to a victory that we get to enjoy.”

Rachel Christmann scored six points off the bench, going 2-for-4 from behind the arc. Isabelle Vacek had three points, three rebounds and two blocks.

“It was a total team effort,” McAnelly said. “All seven girls that played were really instrumental tonight.”

Ankeny will host Marshalltown on Tuesday before hosting No. 13 Ankeny Centennial on Friday.