You are here: Home / Jaguars / Winter / Boys' Basketball / ‘I’m happy for our seniors’: Jaguars cut down nets after beating Urbandale 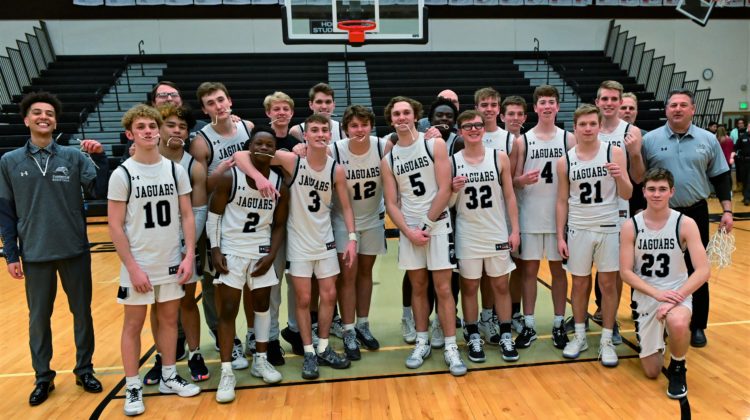 The Ankeny Centennial boys’ basketball team had to wait a week to cut down the nets.

The top-ranked Jaguars clinched the outright CIML Central Conference title on Feb. 7 with a 50-48 victory at Ankeny, so they waited until after Friday’s 62-48 win over visiting Urbandale to bring down the nets in the Centennial gym.

Each of the players and coaches grabbed a piece of the net before they posed for a team photo afterwards.

“I’m happy for our seniors on Senior Night (to get a win) along with winning a conference championship,” said Centennial coach Bob Fontana.

It was the 13th straight victory for Centennial, which finished 9-1 in the league and improved to 19-1 overall. Urbandale’s records dropped to 1-9 and 7-12.

It wasn’t Centennial’s best game of the season, but it was good enough to defeat the J-Hawks by double digits for the second time. The Jaguars won the first meeting at Urbandale, 70-60, on Jan. 18.

Centennial captured its first conference championship since 2015. The Jaguars won the league by three games.

Centennial will play at Fort Dodge (2-18) on Tuesday before hosting Des Moines Lincoln (11-7) on Friday in its regular-season finale.