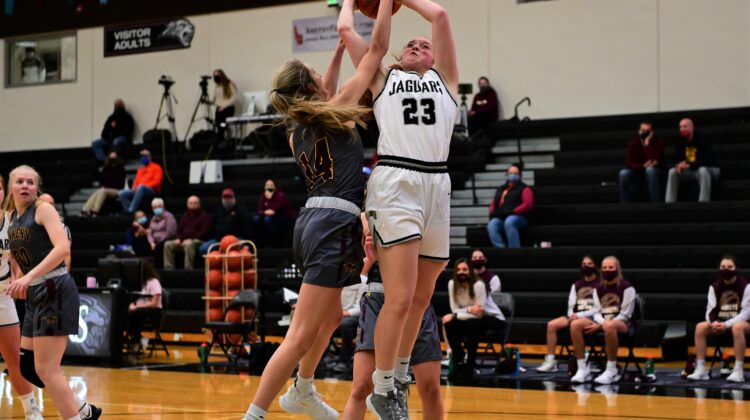 Maggie Phipps led the Ankeny Centennial girls’ basketball team to the semifinals of the Class 5A state tournament in her only season as a Jaguar.

Abby Johnson and Jenna Pitz led Ankeny to its first winning record since the split into two high schools.

All three players have been named to the CIML Iowa Conference first team by a vote of the league’s coaches. Both the Jaguars and Hawkettes had five players honored overall.

Phipps, a senior guard, was one of four unanimous picks to the first team. The others were seniors Ashley Iiams and Caroline Waite of Ames and junior Jada Williams of Mason City.

Phipps averaged 17.3 points per game while leading the Jaguars to a 16-3 record. The Drake recruit made 44 3-point goals and shot 92.1 percent from the free-throw line, making 58-of-63 attempts.

Johnson, a senior forward, led Ankeny to a 10-7 record. The Hawkettes finished second in the conference behind Centennial.

Pitz, a sophomore guard, averaged 9.9 points and 3.1 rebounds. She led Ankeny with 89 assists and 35 steals.

Freshman Reggi Spotts of Mason City was the other first-team selection.

Ankeny had a pair of second-team picks. They are senior guard Ellie Maschoff and senior forward Calyssa Wright.

Junior Tory Bennett of Fort Dodge and sophomore Kennedy White of Ames were the other second-team selections.