You are here: Home / Hawks / Summer / Baseball / ‘I think now we’ve got our bats going’: Hawks pound out 34 hits in sweep 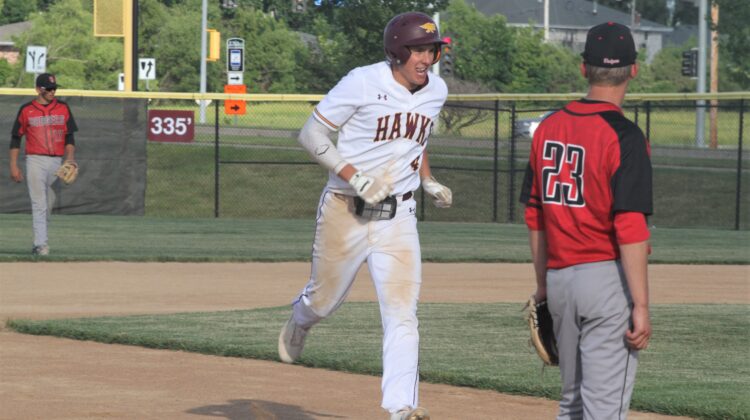 The Ankeny baseball team is starting to look like the top-ranked squad in Class 4A.

The Hawks, who dropped from No. 1 to No. 8 in the rankings after splitting their first 10 games of the season, scored 29 runs on 34 hits while sweeping a CIML Iowa Conference doubleheader against visiting Fort Dodge on Monday. They rolled to 14-4 and 15-2 victories–both of them in five innings.

“We started off slow at the beginning (of the season), but I think now we’ve got our bats going,” said Ankeny junior Ryan Crandall.

Fort Dodge held a 3-2 lead in the first game before Ankeny rallied for five runs in the fourth inning. The Hawks had five straight hits to open the inning, capped off by a two-run single by Cael Boyd.

“We strung all our hits together, and that’s what we needed to get rolling,” said winning pitcher Weston Fulk. “That really gave us a lot of momentum.”

Ankeny then used a seven-run outburst in the fifth to end the game. Crandall hit a two-run homer, his first of the season, to give the Hawks a 10-4 lead.

Crandall later hit another blast with the bases loaded that bounced off the fence. It resulted in a walk-off single to end the game.

“When Ryan is down at the bottom of the lineup swinging it like he is, that’s a long lineup for anybody to get through,” said Ankeny coach Joe Balvanz. “And Cael looked great in the No. 9 hole. It’s probably the best lineup I’ve had the privilege to coach. This team can score some runs.”

Jase Bauer and Kade Somers also went 2-for-4 and drove in a run. Bauer had a double, and Tamden Webb-Tate added an RBI triple.

Fulk (1-2) allowed just one earned run on two hits over the first four innings. He walked four and had nine strikeouts.

“My 0-2 fastball was working pretty well, and my curveball was a good putout pitch,” Fulk said. “I just need to keep locating and keep getting better.”

In the nightcap, Somers went 3-for-4 and drove in two runs. Fulk continued his hitting tear, going 2-for-4 with a triple and three RBIs.

“I think the Heggen Classic (on Saturday) really helped us build and get comfortable,” Fulk said. “Now we’re just playing ball and having fun.”

Brecht leads the team with a .512 average. Four other regulars are batting above .400.

“We’re swinging the bats really well,” Balvanz said. “The guys have had a great approach at the plate.”

Will Johnson (1-1) earned the win in the second game. He allowed one earned run on four hits and had seven strikeouts over the first four innings.

“It’s fun to see them after having a little adversity those first two weeks come together and do what I expected them to do night in and night out,” Balvanz said.

Ankeny will play an Iowa Conference doubleheader on Wednesday at Ankeny Centennial (2-2, 5-7).