You are here: Home / Jaguars / Jaguars fall to Earlham, then top DC-G for their school-record 27th victory 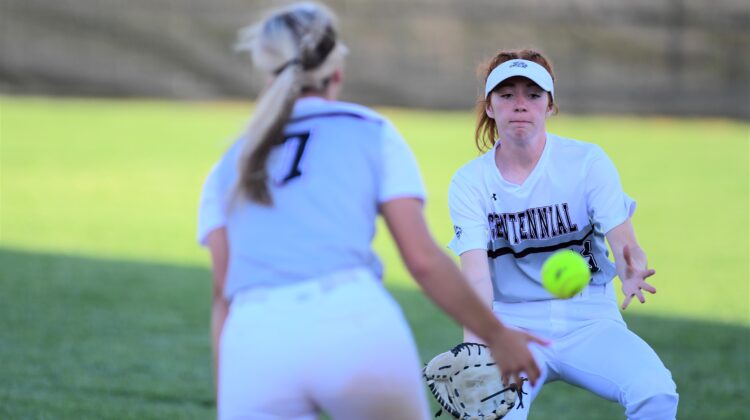 The third time proved to be a charm for the Ankeny Centennial softball team.

After dropping their previous two games, the 10th-ranked Jaguars finally broke the school record for most wins in a season with a 7-4 victory over Dallas Center-Grimes at the Dallas Center-Grimes Invitational on Friday. They raised their record to 27-9, surpassing the previous mark of 26 wins that was set two years ago.

Centennial had earlier dropped a 4-3 decision to Earlham at the Dallas Center-Grimes tournament after also losing at Southeast Polk, 6-5, on Thursday.

“It feels amazing, but as nice as it is our goal is still that (state championship) trophy in Fort Dodge,” said Centennial senior outfielder Morgan Severseike. “Every game is a new challenge, and we just do our best to get on top and get that win.”

Dallas Center-Grimes (18-15), the No. 6 team in Class 4A, jumped out to a 3-0 lead in the first inning. The Jaguars got one run in the second and another in the third, then erupted for five runs in the fifth to build a 7-3 advantage.

Severseike and Ella Schulz each went 2-for-3 and drove in two runs. Schulz also scored twice.

Jenna Wendt (6-2) overcame a shaky start to earn the victory, allowing four runs on six hits. She had three strikeouts and also drove in a run.

Earlier, the Jaguars lost to Earlham (29-9), the No. 11 team in Class 2A. The Cardinals broke a 1-1 tie on a three-run homer by Emma Jensen in the fifth inning.

Centennial tried to rally, scoring one run in the sixth and one more in the seventh. But Earlham pitcher Madeline Janssen held on for the win, scattering nine hits.

Maggie Fisher (5-2) took the loss. She allowed just one earned run on six hits and had two strikeouts.

Sydney Morris went 2-for-4 for Centennial, which will finish the regular season on Tuesday with a CIML Iowa Conference doubleheader at Mason City (8-25).

“Tuesday will be a fun way to close our regular season and will definitely hype us up for the postseason,” Severseike said. “We’re at that point in the season where every girl knows her role and if we all execute and play for each other we can beat anyone!”