You are here: Home / Hawks / Fall / Girls' Swimming / ‘We have a great pool of athletes’: AHS swimmers return 10 state qualifiers 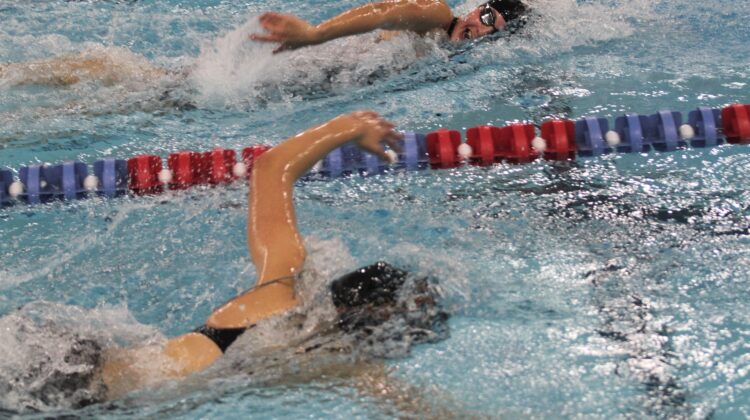 Many of the top performers from last year’s Ankeny girls’ swimming team are back this season.

The Hawkettes have also added some talented newcomers.

“We have one of the largest teams I’ve coached,” said longtime Ankeny coach Michelle Stout, who has 45 girls on the roster. “It’s common to get a spike in interest in an Olympic year, and this (year) was no exception.”

Ankeny posted a 6-2 record in 2020, including a 3-1 mark in the CIML Iowa Conference. The Hawkettes placed seventh at the state meet with 105 points.

“We have a great pool of athletes in this group,” Stout said. “I’m seeing a diversity of strengths that will help us round out a lineup.”

Peck placed seventh in the 100 breaststroke as a freshman, posting a time of 1:07.65. She competed in swimming while also helping the Ankeny Centennial girls’ cross country team to a third-place finish in Class 4A.

Henning took eighth in the 100 backstroke and 17th in the 50 freestyle. She set a school record in the backstroke during the preliminaries, posting a time of 57.68 seconds.

Carleton, a three-time state qualifier in both the 200 and 500 freestyle, is one of the state’s top distance swimmers. She placed 10th in the 500 freestyle and 17th in the 200 freestyle after finishing sixth and ninth, respectively, in those events as a sophomore.

Ankeny also returns all of its relay teams. Henning, Peck, Walker and Pearson teamed up for a fifth-place finish in the 200 medley relay.

Henning anchored the Hawkettes to a 10th-place finish in the 400 freestyle relay. Parton, Rolow and Carleton are also back from that unit.

Pearson, Rolow, Carleton and Parton also combined for a 12th-place finish in the 200 freestyle relay.

Peters, meanwhile, is a three-time state qualifier in both diving and the 100 breaststroke. She placed sixth and 30th in those two events a year ago.

“The dive team is looking solid,” Stout said. “Two of our three state qualifiers are back, and they have their first meet on Monday (at the Johnston Invitational).”

The swimmers will make their season debut on Aug. 31, when the Hawkettes host a dual meet against Johnston. The Dragons placed fifth at last year’s state meet.

“The practices have been high energy,” Stout said. “The girls are sore from work they have been putting in, but I’m excited about the great potential in our young talent. A number of the freshmen will be able to contribute in the stroke events, sprints and even distance.”

Ankeny is seeking its seventh consecutive top-seven finish at the state meet. The Hawkettes placed fifth in 2015, then took sixth, fourth, fourth, third and seventh in the following years.

“We’d like to see girls qualify for state in all events, and one of our goals is to move up in the rankings,” Stout said.