You are here: Home / Hawks / Hawkettes get off to fast start, sweep to victory at No. 10 Johnston 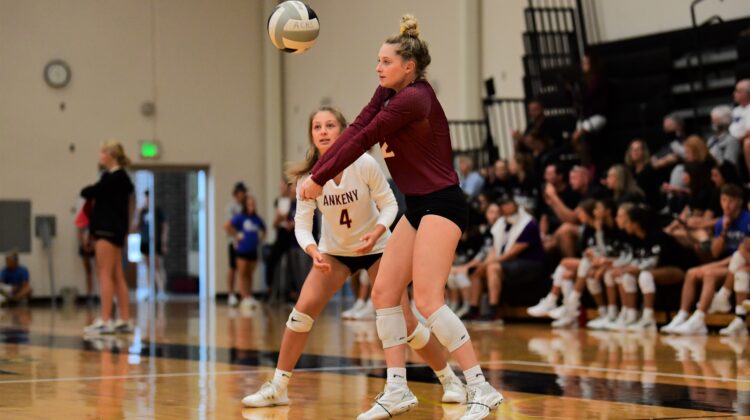 After a sideout by the Hawkettes, Lexi Stephens and her teammates reeled off 10 straight points for an 11-1 lead and never looked back. They improved their record to 14-1, while the Dragons dropped to 8-4.

“This was a big win in my book,” said Ankeny coach Dave Whims. “Coming off a huge weekend (at the Marj White Classic) and playing quality volleyball on a night after a day off from school. We had great effort as a team. It was a very impressive win over a good team.”

Stephens completed all 25 of her serves and had three aces in the win. She also led the defense with 19 digs.

“I really like a balanced attack,” said Whims, whose team finished with 36 kills and hit .218 on the night.

Ankeny also jumped out to a 7-1 lead in the second set behind Halle Ouellette, who completed 11-of-13 serves. Overall, the Hawkettes served at 90.4 percent and had seven service errors.

“Our serving took them out of system most of the night plus our back-row defense allowed us to get good quality swings,” Whims said.

Johnston took a 9-6 lead in Set 3 before Ankeny rallied. The Hawkettes scored the next three points to tie the set and eventually built a 20-16 advantage.

Ankeny closed out the match shortly thereafter. Dasha Svitashev had 10 kills to lead the Dragons, but it wasn’t enough.

“We had a stellar defense tonight,” Whims said. “Overall, it was a great contest. Everybody got in. I got a little playing time for all the girls, and we were very effective in our sideout offense.”

The Hawkettes will play another non-conference match on Thursday at No. 6 Urbandale (9-3).

“They’ve got a tough squad,” Whims said of the J-Hawks. “They’ve got one of the premier hitters in the state in Lily Dykstra.”