You are here: Home / Hawks / ‘We were tired’: Ankeny’s winning streak ends with losses to Dowling, IC Liberty 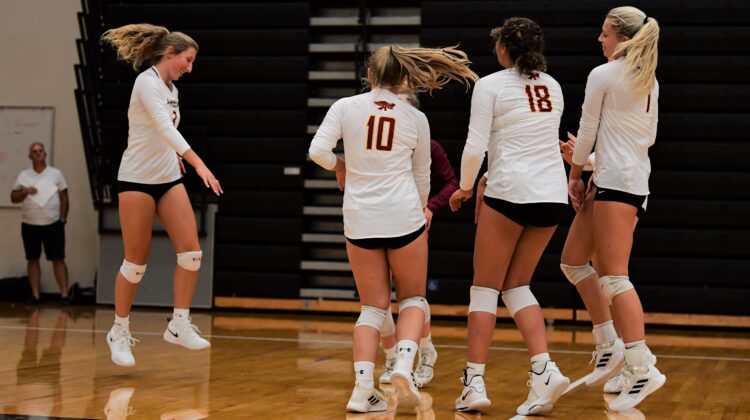 There will likely be another change this week at the top of the Class 5A volleyball rankings.

Third-ranked Iowa City Liberty posted a 25-21, 25-18 victory over No. 1 Ankeny in the semifinals of the Caroline Found Invitational on Saturday at Iowa City West. Liberty then defeated No. 9 Dowling Catholic to capture the title.

The Hawkettes had moved into the No. 1 spot on Thursday after beating then-No. 1 Liberty and No. 2 Valley to win the Marj White Classic on Sept. 4 at Valley.

“This was our 12th match in eight days and 11th match (this season) verses ranked teams in the state,” said Ankeny coach Dave Whims, whose squad is now 18-3. “I think our energy level was low and we were tired. We just could not sustain the needed effort or consistency against a top rated team that has strong hitters.”

Ankeny went 3-1 during pool play. The Hawkettes placed second in their pool.

“Beckman is a very good team, but we came out focused and ready to play,” Whims said. “And I thought we played a high level of volleyball against Mount Vernon, too.”

“We were a few points away from sweeping them in two sets but were denied,” Whims said. “Playing all these ranked teams takes a great deal of effort, stamina and consistency. We ran out of all three as the day grew longer.”

The Hawkettes bounced back with a 21-16, 21-12 victory over Dubuque Wahlert in their final match of pool play. They then lost to Liberty in the semifinals.

“Hopefully, we learned how much energy is required to play at a high level all day,” Whims said. “We realized how each team is ready to give their best effort. This was a great experience, and I’m glad we went through this. Winning 10 matches out of the 12 is a great accomplishment.

“We discovered a few things we need to be aware of,” he added.

The Hawkettes will host a CIML Iowa Conference match against Mason City (7-4) on Tuesday. It will be their home opener.