You are here: Home / Hawks / Fall / Girls' Swimming / ‘The talent level at this meet was sky high’: Hawkettes finish 3rd in Iowa City 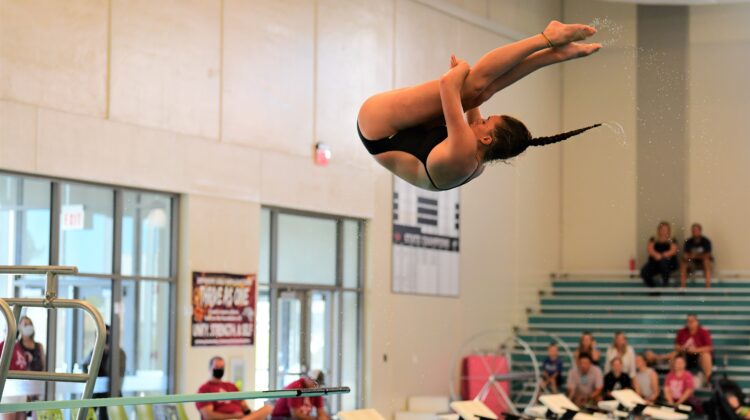 Top-ranked Waukee won the meet with 490 points, finishing 67 points ahead of No. 2 Iowa City West. No. 7 Ankeny took third in the eight-team field with 349 points.

“The talent level at this meet was sky high,” said Ankeny coach Michelle Stout. “We knew that there were a great number of potential state champions at this meet in many events and were ready for the challenge. We came off one of our toughest weeks of training so far this season and had a long road trip to Fort Dodge on Tuesday, yet the team turned in some great performances including some season-best times.”

Ankeny’s lone victory came in the diving event, where Erica Peters won with a score of 442.75 points to remain unbeaten in four meets this season. Hannah Kolars took sixth with 379.10 points.

The Hawkettes opened the meet with a third-place finish in the 200 medley relay. The foursome of Alexis Henning, Anja Peck, Caroline Walker and Gracie Lindaman posted a season-best time of 1:52.27.

“That will move us up in the rankings in that event,” Stout said.

Henning, Peck and Lindaman were among several Ankeny swimmers who had a pair of top-eight finishes in the individual events.

“Anja shaved off some time in the breaststroke, continuing to turn in solid times,” Stout said.

“Rachel moved up from the second of three heats to get fifth in the IM, making her our team’s highest finisher in that event,” Stout said.

“Sophie had great performances in both of those races,” Stout said. “The freshman is quickly showing her strength, especially in freestyle events.”

Parton also helped Ankeny to third-place finishes in both the 200 and 400 freestyle relays. She swam the leadoff leg in the 200 freestyle relay, teaming up with Lindaman, Walker and Loeffler to post a time of 1:44.72.

Loeffler, Rolow and Henning swam the other three legs in the 400 freestyle relay. The Hawkettes were clocked in 3:46.06.