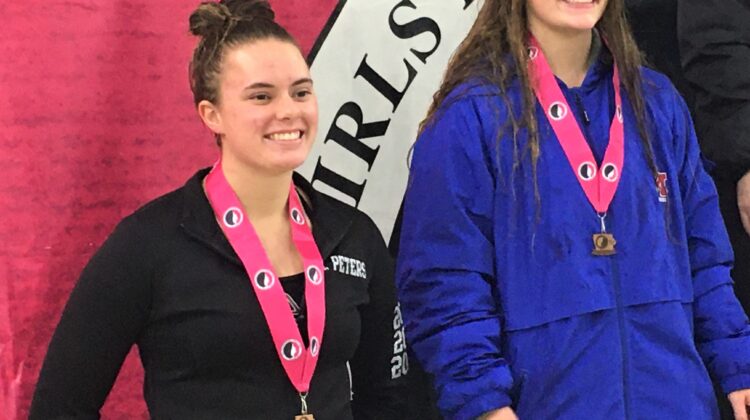 The Ankeny girls’ swimming team sits in eighth place with 13 points after the diving portion of the state meet on Friday at Marshalltown.

Senior Erica Peters capped off her high school career with a second consecutive sixth-place finish. She scored a total of 447.55 points in the 11-dive event.

“I’m pretty happy,” said Peters. “I definitely wanted a little bit better, but I’m still glad that I made the podium this year.”

Peters had two of her best dives in Rounds 7 and 8, posting back-to-back scores of 46.0 and 48.3. That gave her a total of 331.45 points and pulled her within six points of the lead with three dives left.

“It was really close the entire meet, which was really crazy,” Peters said. “It was good competition.”

Avery Hogan of Waterloo East won the title on her last dive, finishing with 470.10 points. Trista Thompson of Grinnell was the runner-up with 469.45.

Cedar Rapids Kennedy placed two divers in the top nine and leads the meet with 22 points. Waterloo East has 20 points.

Afterwards, Peters reflected on the end of her prep career.

“It is a little bit sad, but I’m excited to cheer my team on the rest of the weekend to finish it out,” she said.

Henning posted times of 23.88 in the 50 freestyle and 56.81 in the 100 backstroke, qualifying for the ‘A’ final in both events. That means she is assured of two top-eight finishes, barring a disqualification.

Henning broke the school record in the backstroke during the preliminaries for the second straight year. She dropped nearly a second off the time that she posted last year (57.68).

Peck swam a time of 1:06.13 in the breaststroke, allowing her to qualify for the ‘B’ final. Her time was more than 1.5 seconds faster than her seventh-place time in last year’s ‘A’ final.

The swimming finals will begin at noon on Saturday with the 200 medley relay.

Here are the rest of Ankeny’s results from Friday’s preliminaries: