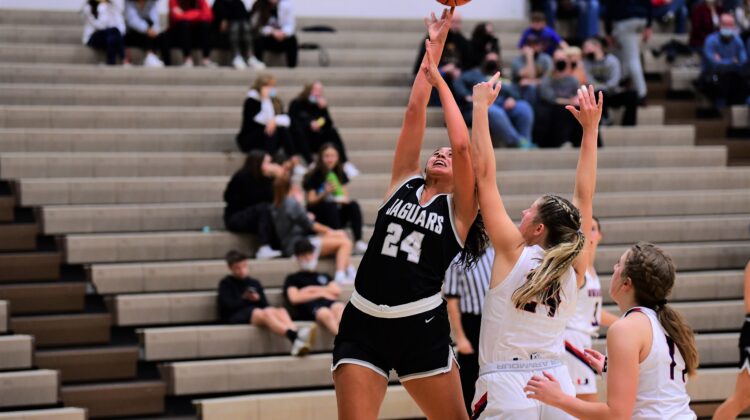 The Ankeny Centennial girls’ basketball team jumped out to a 20-0 lead in the first quarter of Tuesday’s non-conference game at Des Moines Lincoln.

The Railsplitters never recovered from the knockout punch.

Centennial extended its advantage to 34-3 at halftime and 42-3 after three quarters before coasting to a 45-12 victory. The eighth-ranked Jaguars improved to 5-0 on the season, while Lincoln dropped to 1-3.

“We came out strong,” said Centennial coach Scott DeJong. “We had three 3-pointers to start the game, and we played some solid defense. We were able to get a lot of kids minutes.”

The Jaguars forced 31 turnovers while holding Lincoln to just 22.7 percent shooting (5-of-22). Carlee Julius had seven points and seven rebounds to lead the Railsplitters, who opened their season with a 50-30 win over Marshalltown on Nov. 23 but have since lost three straight games by an average of 45 points.

Centennial’s Kennedy White scored 10 points in the win. She grabbed eight rebounds, seven of them on the offensive end, and also had a block.

Cleao Murray contributed eight points and three steals. Averi Porter made 2-of-3 shots from behind the arc and added seven points.

The Jaguars will travel to Mason City on Friday for a CIML Iowa Conference game against the Mohawks (2-2), who dropped a 69-57 decision to Clear Lake on Monday.