You are here: Home / Jaguars / Winter / Boys' Basketball / No. 10 Centennial boys use late 10-1 run to hold off Marshalltown, Thomas 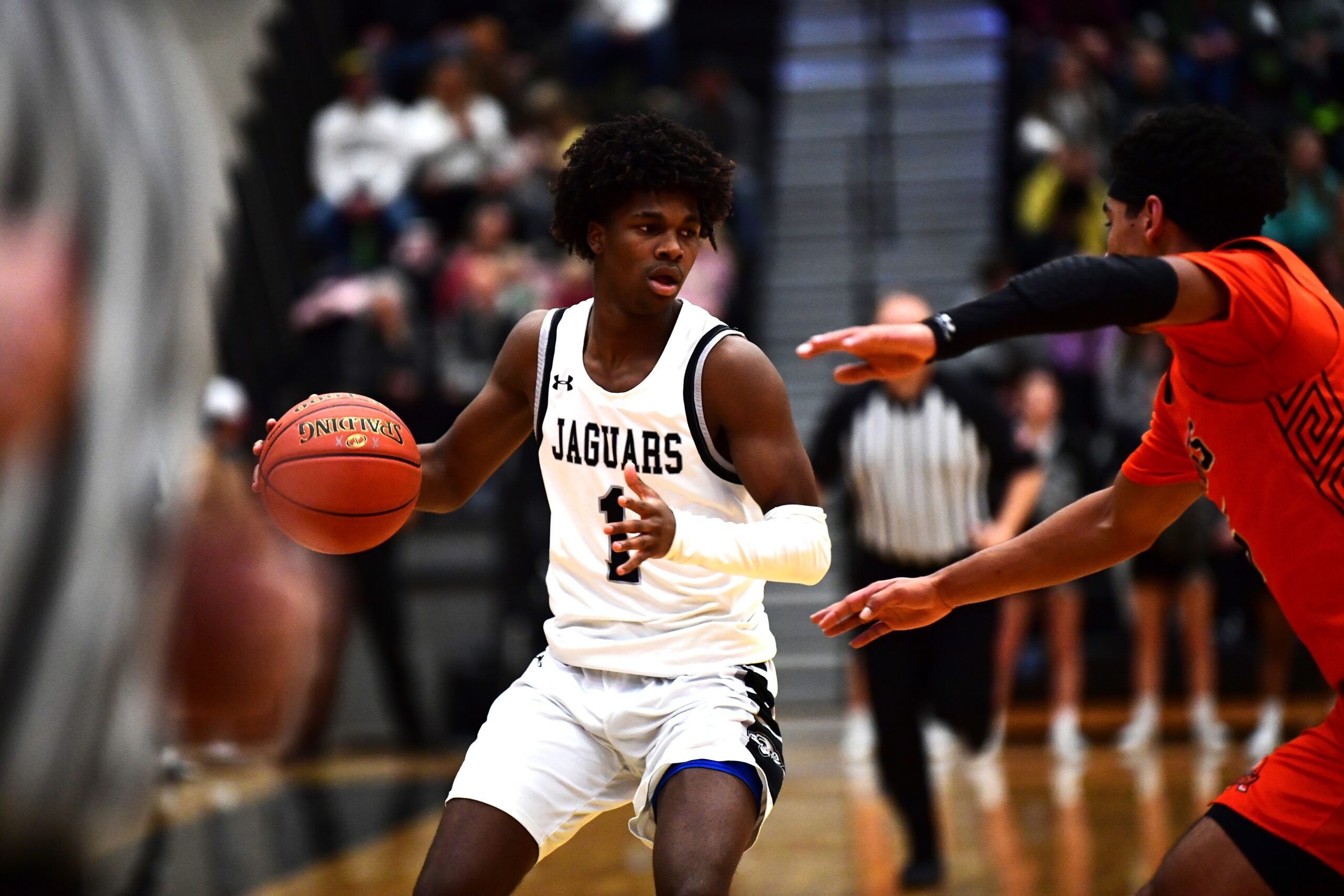 The senior guard scored six consecutive points in the final minute as 10th-ranked Ankeny Centennial held off a late Bobcats’ rally to post a 76-71 victory in a make-up CIML Iowa Conference contest.

The Jaguars bounced back from an 81-79 overtime loss at rival Ankeny on Friday.

“(The Hawks) hit that last buzzer-beater, but I felt like we played well the whole game,” said Louis. “This game we kind of got the pace down and played our way.”

Centennial led almost the entire game and held a 53-42 advantage after three quarters. But the Bobcats rallied in the final period behind Armonniey Thomas, who scored 21 of his 32 points in the second half.

“I like playing against (Thomas),” said Centennial guard Jackson Snyder, who had 23 points of his own. “He always puts up a good fight. You can never get out of there easy.”

Thomas, the Bobcats’ all-time leading scorer, drained a 3-pointer midway through the fourth quarter to pull Marshalltown within 62-56. After Reece Robinson scored for the Jaguars, Thomas answered with a pair of free throws.

The Bobcats then used a full-court press to force two consecutive turnovers, resulting in back-to-back 3-pointers by Thomas and Grant Greazel in a span of just 14 seconds that tied the game at 64-64 with 2:51 left.

“They did (the press) out of nowhere, and we didn’t have the right people in at the time,” Louis said. “So we had to make some substitutions, and then we went from there.”

Centennial coach Bob Fontana said the Bobcats used a similar press in an 80-75 loss to his team on Jan. 28 at Marshalltown.

“We worked on it because they did it up there. We just didn’t execute,” Fontana said. “We dribbled into some corners, and that’s something you can’t do. We just have to do a better job of playing together in those situations and having composure when you have the ball in your hands.”

After Robinson scored to put the Jaguars ahead, Dalen Huston answered with a tying basket for Marshalltown. Caden Kelling then converted a 3-point play with 1:54 remaining to spark a 10-1 run by Centennial that sealed the victory.

“We’ll take a good, hard-fought win,” Fontana said. “We knew they were going to challenge us after we got them up there. Coming off a tough loss Friday night, you hope your kids will respond.

“I just thought we were inconsistent at times. We have to do a better job mentally of understanding situations, and we’ll keep working on that,” he added.

Louis scored on a baseline drive with 59 seconds to go to give the Jaguars a 72-67 lead. He added a fast-break layup with 38 seconds left, then connected on two free throws with 14.8 seconds remaining.

Louis finished with 19 points, five assists and a steal. His performance helped offset Thomas’ prolific night for the Bobcats, which included 14 points in the final 8 minutes.

“He’s good,” Louis said of Thomas, who also had six rebounds, three assists and two steals. “He can come off the ball and shoot (mid-range jumpers), and he can shoot 3s. He finds a way to score.”

Snyder has scored 49 points in the last two games and has averaged 17.2 points over the last six games since he returned to the lineup after missing three games due to an injury. He has made 15 of his last 31 attempts from behind the arc.

“This is probably the best I’ve ever shot it,” Snyder said. “This summer I was kind of feeling it. I’m starting to get that confidence back that I was feeling in July. I’m just letting the game come to me, clearing my mind before the game and not getting too (far) ahead of myself.”

Luke Winkel had 10 points for Centennial, while Kelling added nine points and seven assists. Robinson had eight points, five rebounds and a block.

The Bobcats have lost four straight games–a streak that began with the loss to Centennial last month.

“We made free throws when we had to, and we made buckets when we needed them,” Fontana said. “We’ve got to do a better job defensively, but I’m proud of how our kids responded. You’re not going to have a great game every night.”

Centennial will play a non-conference game at Des Moines North on Tuesday. The Polar Bears (2-18) are coming off a 56-50 loss to Fort Dodge on Monday.