You are here: Home / Hawks / Winter / Boys' Basketball / ‘It feels so good’: Hawks hold off Waukee, advance to state tourney for 17th time 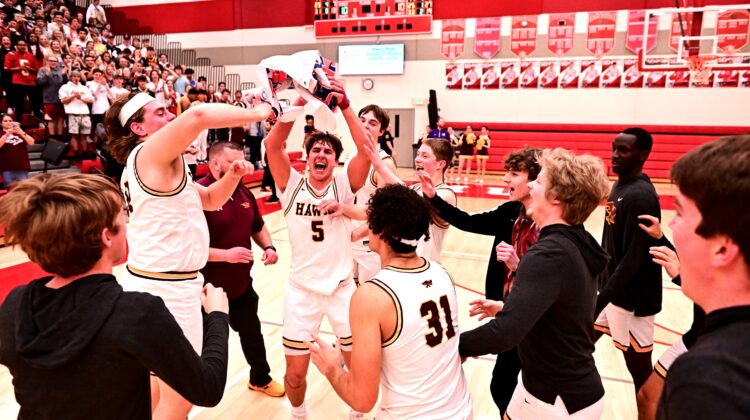 The Ankeny boys’ basketball team is headed to the state tournament for the 17th time.

The ninth-ranked Hawks posted a 62-57 victory over Waukee in a Class 4A substate final on Tuesday at Dallas Center-Grimes. The game featured 13 lead changes.

“It feels so good going back to state,” said Ankeny junior Karson Wehde, whose basket early in the third quarter put the Hawks ahead for good, 33-32. “It’s a great environment there, and it’ll be fun to play there.”

Ryan Crandall scored 20 points and Lio Aguirre added 13 for Ankeny, which improved to 19-4 on the season with its second win over the Warriors. The Hawks made 15-of-23 free throws in the fourth quarter to seal the victory.

Vance Peiffer poured in a game-high 27 points to lead Waukee, which finished at 14-11. Cade Littlefield added 19.

Sixth-seeded Ankeny will play third-seeded Johnston (19-3) in the Class 4A quarterfinals on Wednesday, March 9. Tip-off is at 3:45 p.m. at Wells Fargo Arena.

Check back later for more coverage of Tuesday’s substate final.