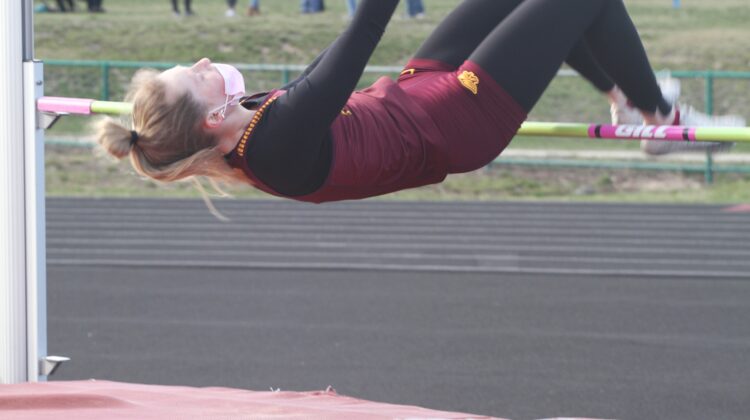 The Ankeny girls’ track team appears to have a high ceiling.

The Hawkettes showed a glimpse of their potential on Saturday in the Brooks Relays at Valley, where they placed fifth in the 11-team field with 81.5 points.

“It was a good day,” said Ankeny coach Thomas Cotter. “We’re starting to put some of the pieces of the puzzle together.”

“She came off of multiple 400s and still threw down a (great time),” Cotter said. “That is the third-fastest time in state thus far.”

Macke also teamed up with Lillian Smith, Gracie Lindaman and Sophie Loeffler to win the distance medley relay. The Hawkettes were clocked in 4:18.81.

“We ran a state best time,” Cotter said. “We like the potential that race has for us as we look beyond the Drake Relays.”

Ankeny’s Kendra Winfrey won the shot put with a throw of 38 feet 2.75 inches. Teammate Hannah Baier was the runner-up in the discus with a toss of 117-1.

“That was no surprise in the throwing events,” Cotter said. “Those were huge points for us, and both Kendra and Hannah are throwing very consistently.”

“She shaved nearly 20 seconds off her season-best time to finish a strong fourth in a loaded field,” Cotter said. “Her time should be good enough to get her in to Drake.”

Lexi Stephens tied for fifth in the high jump at 4-8.

“We still were not quite a full squad with the Centennial prom and other conflicts, but we were happy to compete,” Cotter said. “We will finally have all hands on deck at Ames Tuesday.”