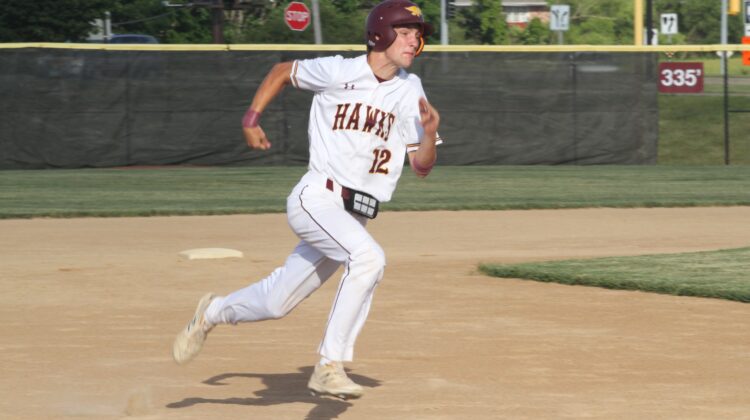 The Ankeny baseball team used a late rally to post a 13-8 victory in nine innings on Monday at sixth-ranked Waukee Northwest, allowing the Hawks to salvage a split of the CIML Iowa Conference doubleheader.

Ankeny scored three runs in the seventh to tie the game at 6-6 and force extra innings. After both teams scored twice in the eighth, the Hawks erupted for five runs in the ninth to hand Northwest (5-1) its first loss of the season.

“We came back twice in the game, and that usually doesn’t happen on the road,” said Ankeny coach Joe Balvanz. “Our guys were gritty, and it was good enough to get the job done. Even when we made mistakes, they refused to give up.”

Jamison Patton went 3-for-6 with a double and three RBIs in the win. The transfer from Des Moines Roosevelt has taken over at shortstop and filled a hole in the middle of the Hawks’ lineup.

“He might be one of the most athletic kids I’ve ever coached,” Balvanz said of Patton. “He’s got a lot of natural ability, but he’s also very humble. I’ve been very impressed with his work ethic. We’re super lucky to have him as part of our program. He really bolsters our lineup and solidifies the left side of our infield for us.”

Tamden Webb-Tate went 2-for-4 and knocked in a run for Ankeny, which improved to 2-2 on the season.

Dylan Schlee (1-0) pitched two innings of relief to earn the win. He allowed just one earned run and had three strikeouts.

Four Ankeny hurlers combined on a five-hitter with 16 strikeouts. However, the Hawks struggled with their control, allowing eight walks and hitting five other batters.

“We gave up too many free bases,” Balvanz said. “But I thought we pitched pretty well. We just need to throw more strikes.”

In the opener, Anthony Watts tossed a four-hitter and had 13 strikeouts to lead Northwest to a 3-2 triumph. Carson Renken went 2-for-2 and had one RBI for the Wolves, who scored the go-ahead run in the bottom of the sixth after Ankeny scored twice in the top of the frame to tie it.

“They’re a pretty talented team with some high-end arms,” Balvanz said of the Wolves. “(Watts) is going to Creighton, and his fastball sits in the upper 80s. He’s in the zone all the time, and he was very impressive. We weren’t quite ready for that velo yet.”

Easton Dunwoody (0-1) took the loss, despite allowing no earned runs over the last three innings. He had three strikeouts.

Thomas DeBrower, Webb-Tate, Patton and Max Watson each had a single for the Hawks. Patton drove in a run.

Ankeny will play a non-conference game at No. 1 Johnston (6-0) on Friday.