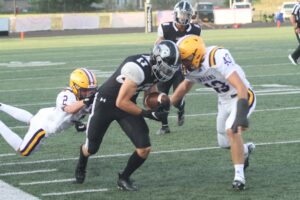 A late rally fell short for the Ankeny Centennial football team in its season opener on Friday. The Jaguars scored two touchdowns in the final 4 1/2 minutes before visiting Indianola recovered an onside kick to preserve a 26-20 victory at Ankeny Stadium. "The second half was just too little and too late," said Centennial co-head coach Ryan Pezzetti. "I … END_OF_DOCUMENT_TOKEN_TO_BE_REPLACED