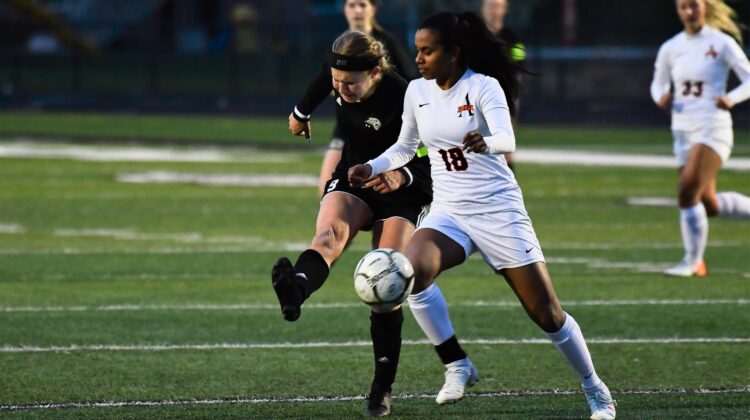 Elizabeth Overberg was trying to set up one of her Ankeny Centennial girls’ soccer teammates for a go-ahead goal.

She ended up scoring the goal herself.

The senior midfielder found the net for her team-leading fourth goal of the season to give the Jaguars a 1-0 victory over visiting Ames on Monday.

“I saw my outside forward creeping in, so I knew I could work off of her movement,” said Overberg. “As she came in, I took the ball down the left sideline and saw my teammates in the box. I know we are a very scrappy and aggressive team, so I just tried to put the ball high enough to give my teammates a chance to put it away. The wind helped redirect it into the side of the net, but I knew my teammates were in the right position to finish the goal if it bounced back in the box!”

The win improved Centennial to 2-0 in the CIML Iowa Conference and 4-1 overall. The Little Cyclones’ records dropped to 1-1 and 2-2.

The Jaguars dominated possession of the ball in the first half, but were unable to capitalize on some early opportunities. Centennial had three consecutive corner kicks during one sequence, but Ames was able to withstand the pressure.

“They really brought it and gave us a great challenge tonight,” Allen said of the Little Cyclones. “I think we left some chances out there on the field. We were really dangerous on some corner kicks, but just couldn’t put anything away. Ultimately, I was really proud of the girls for persevering and keeping the sheet clean on one end and getting a goal on the other.”

Overberg finally broke the scoreless tie when she found the net late in the first half.

“We challenged her to take those opportunities,” Allen said. “She worked to get an overlap on the left channel and was really driving down that side. It’s probably debatable whether it was a shot or a cross, but nonetheless it floated over the keeper and into the far side of the goal from kind of a tough angle. It was a goal worth celebrating, that’s for sure.”

Centennial had the wind at its back in the first half. With the exception of Overberg’s goal, the Jaguars had trouble solving Ames’ defensive strategy.

“We kind of played into what they wanted us to do,” Allen said. “Our opportunities were probably sitting above the 18 and taking the chances from there, especially with the wind at our back. We just needed to be a little more dangerous to bring them out of the box.”

In the second half, Ames took advantage of the wind to create a few chances. The Little Cyclones’ best chance to score came late in the game.

“They had a pretty dangerous threat,” Allen said. “We gave a player too much space and she took a strike at it, and it was floating toward the upper 90 on us but (goalkeeper) Aly (Jumper) covered it well and pushed it up into the bar and then recovered after that. It was definitely a hairy situation.”

The Jaguars will travel to Ottumwa on Tuesday for a non-conference game against the Bulldogs (2-2).