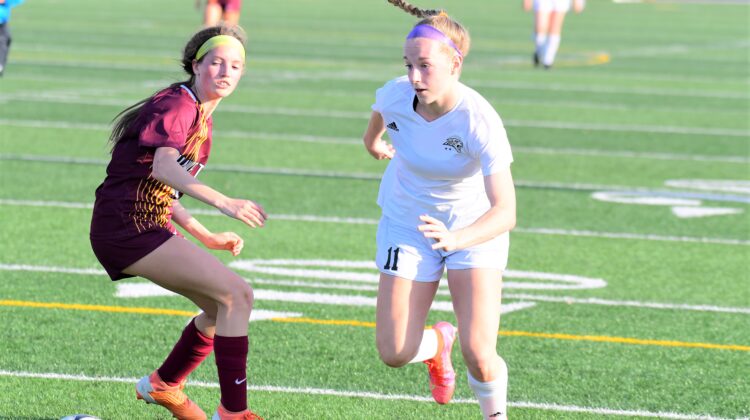 Ankeny Centennial sophomore Averi Porter was named the MaxPreps/United Soccer High School State Player of the Week for Iowa for the seven-day period that ended on May 2.

Porter helped the top-ranked Jaguars to a 3-0 record that week. She had a hat trick and an assist in a 12-0 victory over Fort Dodge on April 27, then added two more goals in a 3-0 win over Davenport Assumption–the No. 1 team in Class 1A–in the Tournament of Champions on April 30 at Burlington.

Overall, Porter has helped Centennial to a 10-1 mark, including a current streak of eight consecutive shutouts. She ranks second on the team in goals (11) and points (25).

Porter was among 21 girls and 22 boys to be honored by MaxPreps. United Soccer Coaches uses results and statistics provided by MaxPreps.com to select one boy and one girl honoree from each participating state competing during the fall, winter and spring seasons.

Winners receive a MaxPreps/United Soccer Coaches branded letterman’s patch and recognition on both MaxPreps.com and UnitedSoccerCoaches.org.

The Jaguars will return to action on Friday, when they host Mason City in their CIML Iowa Conference finale.