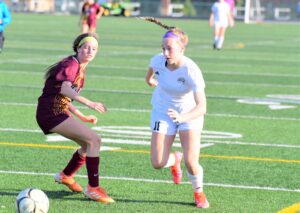 Ankeny Centennial sophomore Averi Porter was named the MaxPreps/United Soccer High School State Player of the Week for Iowa for the seven-day period that ended on May 2. Porter helped the top-ranked Jaguars to a 3-0 record that week. She had a hat trick and an assist in a 12-0 victory over Fort Dodge on April 27, then added two more goals in a 3-0 win … END_OF_DOCUMENT_TOKEN_TO_BE_REPLACED 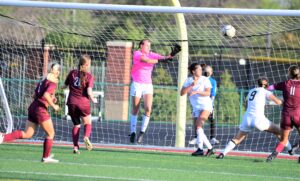 The Ankeny Centennial girls' soccer team tried to not get too hyped for Monday's showdown against its crosstown rival. The second-ranked Jaguars tried to treat No. 7 Ankeny like they would any other opponent. And that's exactly what Centennial did. The Jaguars rolled to a 4-0 victory for their seventh consecutive shutout, dominating the Ankeny Derby … END_OF_DOCUMENT_TOKEN_TO_BE_REPLACED 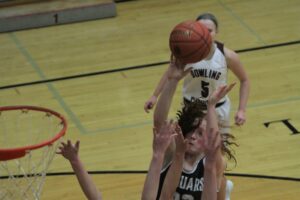 Averi Porter had not attempted a shot all night for the Ankeny Centennial girls' basketball team. When she finally took one, it turned out to be the biggest shot of the game. Porter drilled a go-ahead 3-point goal with 2 minutes 8 seconds left and the fifth-ranked Jaguars went on to post a 48-40 victory at No. 9 Dowling Catholic in a non-conference … END_OF_DOCUMENT_TOKEN_TO_BE_REPLACED 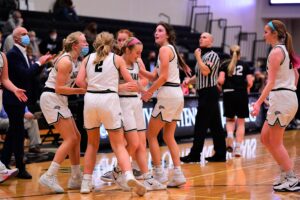 What appeared to be a break for the Ankeny Centennial girls' basketball team turned out to be a mirage. When the fifth-ranked Jaguars showed up for Tuesday's showdown against No. 2 Waukee, they discovered that the visiting Warriors would be without their best player--senior guard Katie Dinnebier. Dinnebier, a Drake recruit, was forced to sit out after … END_OF_DOCUMENT_TOKEN_TO_BE_REPLACED