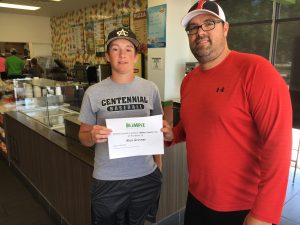 Alex Greiner of the Ankeny Centennial baseball team is the Ankeny Fanatic Sub of the Week sponsored by Blimpie. Greiner helped the Jaguars to a 21-19 record this season. The sophomore lefthander compiled a 4-1 mark on the mound with a 1.78 ERA. Greiner got the start in Monday's Class 4A substate semifinal at 10th-ranked Valley. He received a … END_OF_DOCUMENT_TOKEN_TO_BE_REPLACED 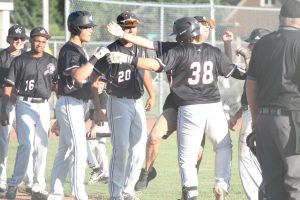 A dramatic rally in the seventh inning put the Ankeny Centennial baseball team in position to pull off an upset at 10th-ranked Valley on Monday. However, the Jaguars couldn't complete the comeback. Centennial scored two runs with two outs to tie the game before Valley's Jevon Mason hit a walk-off single in the bottom of the inning to give the Tigers a … END_OF_DOCUMENT_TOKEN_TO_BE_REPLACED 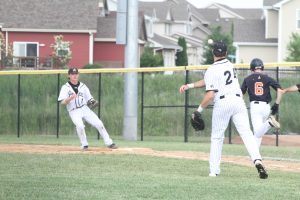 Sioux City North became the latest shutout victim of Ankeny Centennial's Alex Greiner on Saturday. The sophomore lefthander tossed a four-hitter and had five strikeouts as the visiting Jaguars posted a 3-0 victory in the second game to salvage a split of a non-conference doubleheader. He lowered his ERA to 1.26 and now leads the team in wins with a 4-1 … END_OF_DOCUMENT_TOKEN_TO_BE_REPLACED

Saturday was a good day for the Ankeny and Ankeny Centennial baseball teams as both squads won a pair of games in the Tim Heggen Invitational at Ankeny. The Hawks rolled to a 9-1 victory over North Polk, the No. 10 team in Class 3A. They later defeated Davenport North, 5-4, in nine innings to extend their winning streak to six games. The Jaguars also … END_OF_DOCUMENT_TOKEN_TO_BE_REPLACED